Johnny Sexton tempering his temper when it comes to officials 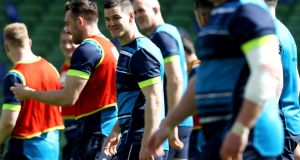 Johnny Sexton with team-mates during the Leinster captain’s run at the Aviva Stadium on Friday. Photograph: Bryan Keane/Inpho

History has shown that Leinster or Ireland will need a new figurehead at any moment. The captains, Isa Nacewa and Rory Best, both turn 36 this summer.

Everyone knows the true leader’s identity, Leo Cullen just put some formality around him when Nacewa was quarantined last Monday. The wife and daughters passed it on. “I thought I was bulletproof,” said the club captain. “No point  bringing a kid’s bug into camp.”

Leadership is shared among a Leinster triumvirate – Scott Fardy being the third – but Johnny Sexton officially takes over against the Scarlets and Romain Poite will just have to deal with that.

“Johnny runs the game from 10 regardless of who’s the captain,” said Scarlets coach Wayne Pivac. “I don’t think it will alter his game at all.”

It might. Bad cop duties might be swallowed as the 32-year-old accepts he must temper his temper when communicating on behalf of the team.

“It’s still a work in progress for me,” said Sexton. “When I’m not captain you don’t have that responsibility of talking to the ref but at times in the heat of battle it can get on top of you. You probably saw that in the Saracens game I probably let myself down a bit in terms of, you know, getting a bit angry or agitated by some of the stuff that is happening.”

This was a problem with Sexton assaulted as Leinster toppled the European champions. Cullen normally cloaks his opinion in platitudes but not that evening.

“It’s just about biting your tongue,” Sexton continued. “Now I’ve a responsibility to speak to [Poite] in the right way. Like I said, it’s something I’ve had a handful of chances to do with Leinster this year. I’ve done it when Rory has gone off for Ireland. It is something I’ve enjoyed but not something I’m overly burdened about.”

Unless these Scarlets get him, be it late or legitimately, he will run the game.

Last season Leinster appeared to veer off a cliff after losing to Clermont at this juncture. The Scarlets came to the RDS and ruined an all-Irish Pro12 final. What went wrong? “A lot. Played badly, they played well. Didn’t do what we were meant to do. It was a really tough week that week as the Lions was picked. I don’t know if that was a distraction for guys.”

The British and Irish Lions to tour New Zealand was actually named the week of the Clermont defeat but the point holds; nobody wanted to miss the All Blacks series while battling for a league medal.

“But anyway, we didn’t put our best selves out that day so that’s what we have to do. People thought it was a one-off and then they did the same to Munster in the final. And again this season they proved they are a very good side.”

The coach and captain conference finishes, as usual, with one from a left field: what is the most disappointing defeat in either of your careers? Last year’s Pro12 semi-final is strongly prompted but Cullen mentions a Welford Road loss to Northampton as Leicester captain.

“I thought the world was ending that day.”

“There’s lots of results that have pissed me off.”

Cullen: “Even the wins.”