Magnificent Murray at the height of his considerable powers 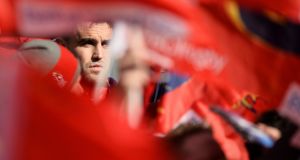 Conor Murray: winning a European Cup with Munster would be a real highlight in an already memorable career. Photograph: Diarmuid Greene/Sportsfile via Getty Images

Thirty five minutes into Munster’s game against the Cheetahs eight days ago at the Toyota Stadium in Bloemfontein, James Hart was undergoing a concussion assessment on field and was about to be replaced. The cameras panned to Conor Murray on the touchline, ready to join the fray.

His co-commentator, Warren Brosnihan ventured that there should be no debate about replacing Hart, not least as “you have an absolute champion on the sidelines. Here he comes”.

“Here he comes,” Bladen confirmed. “Conor Murray, 64 Tests for Ireland. British and Irish Lion. Comes in at 1.88 metres and 94 kilos.”

Over the years, Irish players haven’t tended to receive such introductions in the Southern Hemisphere. This was O’Driscoll-esque!

For sure, it reflects Ireland’s heightened status in the world game, but also Murray’s status now, and at 29, he’s at the peak of his powers.

After that billing, Murray didn’t disappoint either. Munster were trailing 14-0 and with his first touch, Murray burst from the base of a five metre scrum and took a high tackle around the neck from Uzair Cassiem to twist over the line.

It was his seventh try of the campaign in just 13 games for Munster, making it his most prolific season yet for them. He didn’t stop there. For the next half an hour he directed Munster’s game as three JJ Hanrahan penalties gradually trimmed the Cheetahs’ 17-7 lead to 17-16.

Then there was a discussion amongst the on-field Munster hierarchy about what to do with a penalty inside halfway, before the ball was tossed to Murray. He placed it on the ‘t’ and almost nonchalantly landed a 57-metre penalty before turning and skipping away, for what proved to be the match-winning score.

This is yet another string to his bow, as evidenced by his long-range penalty against Racing in the U Arena, that penalty in the historic win over the All Blacks in Chicago, and those penalties in the wins over Wales and in the Grand Slam clincher over England this season.

That he is scaling the mountain top is no surprise. His career has been a remarkably steady incline. It’s the product of a diligent work ethic as well as being blessed with natural talent. He always stood out in his St Munchin’s days, where he cites John Broderick and Brian O’Donoghue as major influences, with the former also coaching him at Young Munster.

In the Munster academy he benefitted from specialist scrumhalf coaching courtesy of Greg Oliver, whom he still works with. On completing his three-year stint, Murray won the Academy’s Player of the Year; the then director, Jim Sherwin, described Murray as the model product of the system in the way he progressed from year to year physically and technically.

In the second half of the 2010-11 season, despite the presence of Tomás O’Leary and Peter Stringer in the squad, Tony McGahan gave Murray a run of games in the Magners League and was vindicated as Munster beat Leinster in the final, with Murray starting.

Early in those early run of games, the late Pat Geraghty, then Munster PRO, vowed to this reporter one day: “That kid will play in the World Cup”.

Given that, in addition to O’Leary and Stringer, Eoin Reddan and Isaac Boss were also well established internationals, the notion of the uncapped Murray, then 22, forcing his way into the squad as one of the three scrumhalves the following October was a long shot.

But, called into an enlarged squad essentially as fifth choice, Murray made an assured debut off the bench in a World Cup warm-up against France in the same Stade Chaban Delmas he will play in tomorrow. He was then picked ahead of O’Leary and Stringer to go to New Zealand.

The aforementioned O’Leary saw him looming in the rear view mirror as soon as anyone.

“I was having issues with injuries and struggling for form then, and this guy comes in. From day one you could see his class. Coupled with his physicality, his passing game was crisp and he was a good kicker then, although obviously it has progressed to being the best in the world now.”

“But his composure was probably the most significant thing that hit me. I knew that I’d be in trouble anyway. For a young guy coming into a pivotal position he never seemed to get flustered, even back then. He’s a very relaxed guy, and that’s both on and off the pitch, and he’s still like that to this day. For a kid, that kind of struck me.”

Tomorrow afternoon, O’Leary will actually be playing his first senior hurling championship match in 15 years for Erin’s Own.

“The hurling is my priority now,” says O’Leary, although he’s not blind to Murray’s achievements.

Murray went out to the World Cup as third choice and returned virtually as first, a pattern which would be repeated on the 2013 Lions tour to Australia.

“Ever since then, he’s been a regular with Ireland and hasn’t really had a genuine contender,” says O’Leary. “Eoin Reddan played back-up for a while, and now it’s between Marmion and McGrath, but they don’t really come close. I think McGrath has come on leaps and bounds this year but it’s still not even a conversation really.”

After starring in all three Tests against the All Blacks, Gatland said Murray’s challenge now was to play the perfect game. As a scrum-half he has long since been ticking every box, and is now adding additional ones. Nimble on his feet and a crisp passer, he fulfils his basic duties adeptly, while of course there’s his brilliant box kicking.

Discussing this earlier in the week, Andrew Conway said: “With someone like Conor it goes quite high, so you have time to navigate yourself around the opponents who are trying to make your line tougher. I do practice with him two or three times a week on it, so there is definitely an advantage in knowing the flight of the ball.

“He pretty much puts it wherever he wants every single time, so I know it is going to be two or three metres one way or the other, left or right, up or down.”

Then there’s Murray’s strength and sharpness, and his high conversion of snipes into tries. Amongst his 13 Test tries, including one for the Lions, there have been four in nine Tests against the All Blacks, a record for a Northern Hemisphere player.

Such is his strength, he hardly ever loses possession in contact, even if tidying up loose ball off the deck, or attaching himself to a ruck to secure the ball. He’s an excellent defender, around the fringes, corner flagging or filling into the defensive line.

And then there’s his footballing ability. Whether covering an opposition kick in behind, or under a high ball, snaffling a loose ball on the deck or reacting to a turnover, he invariably chooses and executes correctly.

Murray is, as O’Leary says, simply “pivotal’ to what Munster are about, and cites how much he was missed in last season’s European Champions Cup semi-final defeat to Saracens. Add in the Pro12 final beating by Glasgow three seasons ago. How Munster missed him that day too, although it also has to be said that Murray was back for the 46-22 defeat to the Scarlets in last season’s Pro12 final.

Johann van Graan was asked after one game this year if he was worried when he saw Murray receiving treatment during a game.

“I always worry about Conor Murray,” he said with a smile and, one guesses, a fair element of truth.

“He just delivers every single week,” says van Graan. “He’s just incredible. I think his biggest asset is maybe his decision-making, he seems to make them in slow motion and he seems to make the right one time after time. Also, when he’s on the field he brings a lot of calm to the team.”

Winning a European Cup with Munster would emulate Stringer in 2006 and O’Leary in ’08. At Test level, with Ireland’s Grand Slam this year, Murray has emulated the same pair in 2009, and he was also part of the 2014 and 2015 Six Nations titles. He has those two Lions tours, bridging a gap back to 1980 since John Robbie was the last Irish Lions scrumhalf. With the World Cup to come next year, there’s still plenty left for Murray to achieve.

With 69 caps, including five for the Lions, Murray trails Stringer’s fine record haul of 98, but if his body continues to stay healthy, he should become the first Irish scrumhalf to reach 100 caps.

Either way, O’Leary doffs his cap to his fellow Munster man.

“Considering what he’s already achieved in the game, and his level of performances, then yes, you’d have to say he’s the best scrumhalf we’ve ever produced.”

What’s more, he’s the best in the world right now. And he’s Irish. And he’s not nearly finished yet.