All in the Scrum: Tom Daly dives back into action with Lansdowne

Chris Ashton breaks a Top 14 scoring record, Edinburgh off to a flyer against the Scarlets 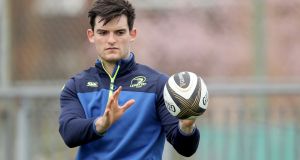 There may not have been many smiles in the RDS on Saturday night but at Lansdowne Road Leinster’s Tom Daly ended his nine-month injury lay-off with an encouraging run-out with Lansdowne RFC.

The Division 1A table toppers finished off the regular season with a 26-17 bonus point victory over relegated Buccaneers.

The Carlow man injured his ACL in his right knee during Leinster’s first pre-season game against Perpignan in August 2017 and his run-out for Lansdowne was his first piece of competitive action since then.

Playing in the centre and partnering Lansdowne’s top try scorer this season, Mark O’Keefe, Daly can now start to play catch up with his housemates in terms of pitch time.

The 6 ft 4ins centre was given his first fully professional contract by Cullen ahead of the 2017-17 season after captaining the Irish sevens team.

He was part of the squad that played in the final Olympic Qualification Tournament for the 2016 Summer Olympics in Rio. That, however, came to no good when they were knocked out in the quarterfinals by Spain.

Ashton on fire in France

Munster fans will remember him from Toulon’s failed visit to Thomond Park a few weeks ago. The England winger Chris Ashton, who dotted down for the French team that day, has continued in a rich vein of form for his French club.

Ashton took seven minutes to break the record for tries scored in a Top 14 season as three times European champions Toulon defeated Montpellier 32-17 at the Orange Velodrome to keep their semi-final hopes alive.

Fabien Galthie’s men dominated the opening quarter of the match as Ashton crossed the whitewash for his 22nd try of the domestic campaign. That overtook Napolioni Nalaga’s 21 try haul for Clermont Auvergne in 2008-09.

The number of times Treviso have beaten Leinster.

In their own words

Edinburgh’s match against Scarlets might have been of some interest to Leinster fans in a theoretical sense. However the team the Welsh club put out in Murrayfield was very much “before the Lord mayor’s show,” which is this weekend’s meeting with Leinster in the European Champions Cup semi-final.

Edinburgh scored their fourth bonus point try within 23 minutes and were 26-0 up after 25 minutes.

There was some mumbling on Sky that another team in the Pro 14 league had previously gained a try bonus point inside 23 minutes – that was Leinster. Still Edinburgh coach Richard Cockerill can take a bow. An average of under six minutes for each of the four tries isn’t bad.

There’s no date yet set for the Frazer McMullen Cup final between Clontarf and Dublin University. The under-20 competition reached its penultimate stage over the weekend following the semi-finals with Clontarf beating UCD 27-25 in Castle Avenue and Trinity getting the better of last year’s beaten finalists Lansdowne 39-24 in Aviva Stadium.

There will be a new winner as Navan won the trophy last season with Lansdowne and Cork Constitution sharing it for the previous four years.