Tough challenge for Ulster on a night of retirements

Iain Henderson has been handed captaincy, with Rory Best on the bench 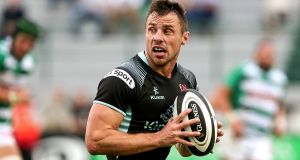 Ulster’s Tommy Bowe: a huge tranche of the rugby community would like to see him bow out in style in his final home match. Photograph: Giuseppe Fama/Inpho

On a night when the Ravenhill faithful will be biding a fond farewell to two of their favourite sons Tommy Bowe and Paul Marshall, who retire at the end of the season, and fullback Charles Piutau, whose instinctive brilliance captivated the hearts and minds of Ulster supporters, there’ll be a fervent desire not to say goodbye too to the prospects of playing Champions Cup rugby next season.

Ulster are a point ahead of Benetton in the table, so a victory would give them a significant fillip and some leeway going into the final round of fixtures. The Irish province must travel to Thomond Park, while Benetton will host fellow Italian side Zebre, which in all likelihood they’ll win and potentially with a bonus point to boot.

Edinburgh are nine points ahead of Ulster having played a game more, and they are at home to the Glasgow Warriors Saturday next week. If Jono Gibbes’ side do manage to finish fourth – the Cheetahs don’t count in the final placings when it comes to European qualification – they will probably face the Ospreys, with the winner earning a prized slot in next season’s Champions Cup.

Those are the permutations, but what’ll determine Ulster’s fate is the calibre of the performances they produce in the last two games, starting with the visit of the Warriors. It’s a tough challenge against a side that has played some cracking rugby all season, and are already assured of a number one seeding and a direct route into the semi-final of the Guinness Pro 14.

There won’t be much succour from the home supporters when they scan down the Glasgow team-sheet given the presence of high-profile internationals like Stuart Hogg, Tommy Seymour, Huw Jones, Finn Russell, Rob Harley and Tim Swinson in a team that show six changes from the side that beat Connacht.

Glasgow head coach Dave Rennie said: “We are rapt to have confirmed a home semi-final berth and see the next couple of weeks as a chance to build momentum against tough away opponents.

“Ulster still have a chance to qualify for the Final series [in the Pro 14] and Europe, so have plenty to play for. They lead the competition in line-breaks, so keeping players like Jacob Stockdale and Charles Piutau quiet will be crucial.”

There was a great deal to admire in the character shown by Ulster in their most recent display, an 8-0 win over the Ospreys. It was something of a travesty based on their dominance that they only led 3-0 before Stockdale’s late try, but it does offer a reminder that the home side need to be more ruthless when it comes to tacking on points to ascendancy in general play.

Iain Henderson has been handed the captaincy with Rory Best on the bench, and there’s no doubt that he will lead by example but will need a full take-up from those around him. Johnny McPhillips has passed his return-to-play protocols having suffered a bang to the head and been replaced against the Ospreys.

There is little doubt that the home side possess enough pace, power and guile in the back line given a reasonable platform. Sport rarely doffs its cap to sentiment, but there’ll be a huge tranche of the rugby community that would like to see Bowe bow out in style in his final home match.

The 34-year-old has enjoyed a brilliant career of which he should be proud, going on two Lions tours (2009, 2013), that included a series victory in Australia and winning 69 caps for Ireland, scoring 30 tries and being an integral part of the 2009 Grand Slam winning team, including that memorable try at the Principality stadium.

He demonstrated great character in adversity in coming back from a couple of serious injuries. A popular figure among players, coaches, supporters and the media for his perennial good humour, he will be missed.

Marshall too deserves to be lauded for his contribution to Ulster rugby. A victory against the Warriors would be the perfect way to celebrate in every respect.