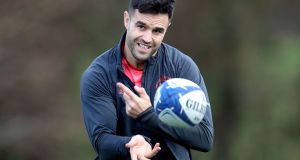 Munster’s Conor Murray in training ahead of their clash with must-win Saracens. Photograph: Bryan Keane/Inpho

The dust having settled on the thriller with Racing a fortnight ago, that draw has left Munster in familiar must-win territory for another of the time-honoured Saturday evening Anglo-Irish affairs which have richly decorated the Heineken Champions Cup.

The build-up to this eagerly awaited fixture has been dominated by speculation on Saracens’ selection and at face value Munster’s chances of victory appear to have been enhanced as, true to his word, Mark McCall has opted to rotate his squad. Maro Itoje is the only member of their six-strong contingent from England’s World Cup final starting XV travelling to Limerick.

Mako Vunipola, Jamie George, Vincent Koch, George Kruis, Billy Vunipola, Richard Wigglesworth, Owen Farrell, Duncan Taylor, Sean Maitland and Elliot Daly have remained at home. But McCall has strongly intimated many of them will be back for the return meeting in Allianz Park next Saturday.

“You know the situation we’re in,” McCall told The Irish Times yesterday. “What we have, post-World Cup, is 15 consecutive matches, nine Premiership and six European Cup games. Probably in the past, like Munster do and like Leinster do, you target these European Cup games and you rest your international players around them. We’re not in that position this time, so we kind of figured out a plan that gives us a chance of qualification in Europe but allows us to spread our resources over all those 15 games in a sensible way.

“A lot of those players who you’ve named there will be involved next weekend. We’ve got a few non-internationals who have played a hell of a lot as well and we need to look after them. We haven’t finally made that decision yet but we’ll probably involve some of those international players who aren’t playing this weekend next weekend.”

This team features 10 of the starting line-up and 13 of the match-day squad from Saracens’ opening pool game against Racing in Paris, when they were beaten 30-10. But they’ve also formed the core of the side that helped them win three of their opening four matches before the big guns returned for last week’s typically obdurate 25-12 win in Bath.

For their part, in making 14 changes from the side which started last week’s defeat by Edinburgh in Musgrave Park, Munster have restored James Cronin and Stephen Archer to the frontrow, as well as Billy Holland, so shifting Tadgh Beirne to blindside and Peter O’Mahony to openside in otherwise reverting to the starting XV against Racing.

It will be Beirne’s first start in the Munster backrow, with Jack O’Donoghue dropping to the bench where, in modern South African mode, Johann van Graan has again opted for a 6-2 split. Following the departure of Alby Mathewson, Nick McCarthy is the back-up scrumhalf.

Munster will be wary of what is still a strong Saracens line-up. Richard Barrington made light of Mako Vunipola’s loss half an hour into last May’s final against Leinster and will pack down alongside Jack Singleton, an England international, and the USA World Cup tight-head Titi Lamositele.

Itoje will be partnered by the re-invented and trimmed down (these things being relative) Will Skelton in a powerful secondrow. The backrow features regular openside Jackson Wray at “8” alongside another off the Saracens production line, the hugely promising 21-year-old Ben Earl, who has captained the England under-20s and has already been in expanded English squads.

Ben Spencer was England’s World Cup final replacement scrumhalf and will partner Manu Vunipola, cousin of Mako and Billy, while skipper Brad Barritt is partnered by another England international, Alex Lozowski, in the same midfield pairing that played against Leinster in Newcastle.

Admittedly, the back three is relatively inexperienced if quick, while the bench looks particularly callow, with an average age of 21 and a half.

Ultimately though, 10 of this squad played in last May’s final. Besides which, Munster supporters who were at the opening game of the 2008-09 campaign, the first at the redeveloped Thomond Park, will be mindful that Montauban, making their debut in their sole appearance in the competition, brought a second string team. They were only denied a famous win by a 78th minute, and contentious, penalty by Ronan O’Gara.

Granted Saracens won’t have their warrior outhalf Farrell, who made 15 tackles last weekend, most of them meaty, and missed none, while also kicking seven from seven. But Barritt will lead their famed defensive line, which will be a test for Munster’s more expansive attacking game.

Although some rain is also forecast, unlike the perfect running conditions for the Racing game, Munster are clearly intent of pursuing their passing, offloading game, much of it through the rejuvenated JJ Hanrahan.

It will be far from routine, but with the benches to come into play, Munster should ultimately pull through.

1 Gerry Thornley: After 32 weeks the Six Nations is back up for grabs
2 Extremes of sweet and sour for Solskjaer as Man United show signs of revival
3 Arsène Wenger: Arsenal was a matter of life and death to me
4 Stockdale and Ringrose on board with expansive Irish game plan
5 Bennett girding his loins for impossibly unpredictable Vuelta
Real news has value SUBSCRIBE