New Munster battle some old-school weather to hold off Saracens 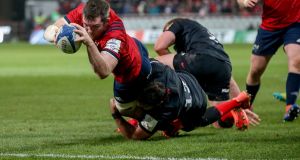 Munster’s Peter O’Mahony stretches out to score a try during the Heineken Champions Cup match against Saracens at Thomond Park. Photograph: Gary Carr/Inpho

If this was the proverbial game of two halves, the cause was the weather. Munster were deserving of their hard-earned 10-3 interval lead, earned during a mostly dry first half, and ultimately for their win after a rain-sodden, gusting and scoreless second half.

After an ambitious first-half performance, Munster cut their cloth to suit their measure with a win which will generate little in the way of eulogies, but which was vital all the same.

However, the bonus point which Saracens accrued will probably keep the holders interested in the outcome of Pool Four and hence for next Saturday’s return meeting in the Allianz Park.

With Racing in pole position after their bonus-point win away to 14-man Ospreys and welcoming the troubled Welsh region to the U Arena , these two protagonists could by vying for a runners-up qualification spot.

Clearly not for turning on their new path, Munster again sought to keep the ball in hand as they probed for openings close to the gainline, whether it was Conor Murray firing the ball across a line of would-be carriers and rarely picking out the first one, or JJ Hanrahan taking the ball to the line and bringing runners off either shoulder into play.

The way they accelerated into contact was taking a leaf out of Japan’s game and through their work in contact and ball presentation, they looked to play at a very high tempo. They again looked to explore the blindside more than they used to do, while also playing with width.

While this was not a first-choice Saracens, nor was it an entirely second-string either, and no matter what team takes the field, their famed wolf pack defence remains the cornerstone of their game. Their line speed, physicality in contact and spacing continually asked questions of Munster, and in tricky conditions, the home side lacked accuracy. Munster’s kick-off receptions and exits also regularly gave Saracens the chance to put them under pressure.

However, with the arrival of the rain before half-time, and which worsened after the break in tandem with the wind, Munster had no option but to resort to one-off runners and box kicks. Even first receivers fumbled on a regular basis as the handling errors reached into double figures by both teams.

The forecast rain had at least stayed away until kick-off, and the game commenced in chilly, if not especially cold, and breezy conditions, as JJ Hanrahan kicked off with the wind blowing from behind him at the Mayorside end.

Saracens made their competitive intentions clear from the off when forcing turnovers at Munster’s second ruck and second throw-in. But Munster put together a 19-phase, high-tempo attack off a lineout inside halfway, which was more New Munster than a procession of one-off runners. It was initiated by Andrew Conway ghosting onto Hanrahan’s inside pass to make a half break which would have led to more but for Ben Earl’s tackle. The move featured good use of the blindside and width, supplied by Rory Scannell’s long skip pass to Conway and ensuing support line on the inside.

Accelerating onto the ball and pumping their legs with the help of team-mates latching on, they had recycled to within five metres of the line when Stephen Archer fumbled at the base, with some help from Maro Itoje’s long arms.

Munster pilfered the Saracens throw, and Chris Farrell opted to keep the pressure by finding touch in the corner. Keith Earls, seeing plenty of ball, chipped into space and made the follow up tackle on Matt Gallagher, with Tadhg Beirne first over the ball to help earn an attacking penalty.

Instead of setting up a maul, they tapped into the corner, Munster opted for off the top ball and launched Rory Scannell up the middle. Jean Kleyn, CJ Stander and Beirne carried in turn before the latter was held up over the line. They couldn’t convert a scrum penalty into a try, but took the three points as consolation.

Itoje was throwing himself about, and one flying clear-out on Mike Haley incurred the wrath of the crowd and the officials, so giving Munster a relieving penalty, after loosehead Richard Barrington had cheekily dummied Kleyn.

Munster thought they had scored the first try when re-enacting a reprise of a new strike play unveiled against Racing. Earls was at first receiver from more off the top ball and passed along the halfway line to Farrell, but rather than pull the ball back for Rory Scannell and Hanrahan on the wrap, the outside centre knocked on.

Haley gathered the loose ball and put Conway away before Scannell gathered the winger’s looped inside pass to round the posts, but on review Farrell had clearly deflected the ball forward.

Finally, Munster breached the Saracens line just past the half-hour. Again it emanated from a scrum penalty on halfway and a penalty up the line to outside the 22. Again they launched Farrell and sought to go through high-tempo phases.

Going wide right, Haley did well to keep the ball alive when being tackled into touch, and Hanrahan did even better to dive and pop the ball up to an alert Niall Scannell. Going wide left, Rory Scannell’s flat, skip pass gave Earls the chance to beat Gallagher and set up an attacking ruck. Murray was quickly there to fire out a flat skip pass for O’Mahony to score with hard, outside-in line – while Beirne’s decoy fixed those defenders inside. It had been hard work, but Hanrahan’s conversion made it 10-0.

However, Niall Scannell was immediately pinged for playing the ball after planting his hands on the ground. With the rain arriving and the wind picking up, and Ben Spencer kicking into the teeth of the elements, his penalty was held up and rebounded from the upright, but after gathering, Farrell miscued his clearance, slamming it into Archer’s head. Barrington was first to reclaim possession and Munster were relieved to merely concede a short-range penalty for ‘fringing’ as Saracens laid siege to their line.

A couple of physical, imposing defensive sets by Saracens forced Hanrahan to take to the air, and Haley to grubber in behind, before Murray was snaffled in possession. The 10-3 interval lead, before turning into the wind, did not appear much of a buffer, least of all as the rain intensified during the interval.

Facing into the elements, O’Mahony could not gather the kick-off, before an Itoje knock-on relieved the pressure. Even so, Stander was harshly penalised by Romain Poite, making the penalty count six-three at that point.

The postman always knocks twice, and Spencer hit the left-hand upright at the Ballynanty end, O’Mahony gathering and, unlike Farrell, finding a good touch. But it was beginning to look it could be a long half into the strengthening wind and rain, for home team and crowd alike.

A 13-phase Saracens attack ended when Nick Skelton knocked on, but good lineout pressure by Billy Holland, a good read and tackle by Rory Scannell and Beirne’s presence over the ball earned a relieving penalty against Nick Isiekwe for not releasing.

But they shut the door, forcing Murray to take to the air, before kicking a penalty long into the corner, when Munster’s lineout defence came to the rescue once more. Alas, when Earl was pinged for not rolling away after another good carry by Rory Scannell, Munster’s lineout malfunctioned.

The sodden crowd, to their credit, managed a rendition of The Fields and they roared into life when Rotimi Segun fumbled a punt upfield by Conway. But Conway couldn’t hold Murray’s blindside pass from the scrum, when a grubber might have been the better option (or so it seemed from the dry seats).

Fineen Wycherley and Jack O’Donoghue added some oomph to help force a turnover at a Saracens maul, Hanrahan followed up his own skewed kick by charging down Spencer’s clearance, and Wycherley was alert to a loose ball at the base of a Saracens ruck.

At least it was helping to run down the clock, and in the Saracens half, but the typically vocal reaction of their players when Joel Kpoku won a turnover penalty told you they were still very interested.

Helpfully, O’Mahony did what he does when stealing Jack Singleton’s throw to the tail from in front of Itoje, who was promptly penalised for going off his feet. Such was the Saracens pressure at a shortened lineout that Niall Scannell threw waist high to Holland at the front but soon after John Ryan fumbled.

O’Mahony was furious with himself when pinged for going off his feet inside the Saracens’ 22, for he knew this gave the visitors an overdue foothold with less than three minutes to go.

But the talented Earl spilled when tackled by Liam O’Connor, and after a charge by Arno Botha, Hanrahan kicked the ball dead, but home celebrations were premature. Poite went to the TMO, and Botha had led with his forearm into the face of Nick Tompkins. The latter had dipped, and at first reaction the red card seemed harsh.

More pertinently, it was definitely a penalty and Saracens had one more attacking lineout, but O’Donoghue stole it due to thunderous cheers, which briefly switched to boos for Poite. On reflection, as well as the warmth of nearby hostelries, the abiding feeling was probably one of relief.