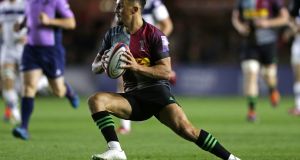 Niall Saunders: “I set my goal at being the number nine at Harlequins and that is something that I want to achieve.” Photograph: Henry Browne/Getty Images

Niall Saunders steeled himself momentarily; then pushed open the door to the then director of rugby at Harlequins, John Kingston’s office, walked in and asked to terminate his contract. He knew it was the right thing to do for his mental and physical wellbeing, but he could scarcely believe it had come to this point or that he possessed the courage to sunder a lifelong ambition.

But he had to; the migraines, the insomnia, the seemingly insurmountable battle against a long-standing blood disorder, had left him frazzled and deeply unhappy to the point of despair. Depression could have become an issue if he had allowed things to fester any longer.

From the time that Saunders picked up a ball as a five-year-old, he dreamt of being a professional rugby player, and of playing for Ireland, thereby following in his father, Rob, into the green jersey. The standing joke in the Saunders household, as Niall grew from toddler to teenager, was that he would eclipse Rob’s 12 Irish caps (1991-1994), and flip any reference point on its head.

Niall was consumed by the sport.

A quicksilver scrumhalf like his father, he was welcomed into the Harlequins academy in his mid-teens, played underage representative rugby for Ireland, making his Irish Under-20s debut in a Six Nations game against Italy in 2016 while still at school in Epsom College. Then that summer, aged 18, he was the baby of the James Ryan-led Ireland squad that reached the Junior World Cup final, before losing to England in Manchester.

To understand the courage it took to terminate his first professional contract of his own volition it’s important to fully appreciate Saunders’ back-story.

“From two years old I have had a blood disorder called ITP (Idiopathic thrombocytopenic purpura, sometimes referred to as immune thrombocytopenia) where my antibodies believe that my platelets are a virus, attack them and rid them from my body.

“It’s on the spectrum of being a haemophiliac but I am not a haemophiliac. To put it in perspective you will have 150,000-400,000 platelets in your body; I was down at 1,000 at times, while a 10,000 [count] was the highest I would ever go. If I got a cut [blood wouldn’t clot normally] or took a knock I would bruise pretty significantly. I’ve had a dead leg that lasted for four weeks. I pretty much lived in ice every time I played rugby just to get back playing the next week.”

Saunders had four weeks off between the 2016 Under-20 World Cup final before taking up his first professional contract. He picked up a bang. He explained: “From late August through to January [2017] I wasn’t playing any rugby, I was just training. At this point I tried drugs to try and [regulate the blood disorder issue] get back but none worked.

“The one that I am taking now, Nplate [Romiplostim] I tried then; it gave me really bad headaches and insomnia. I was suffering from some pretty nasty side effects. The last thing I wanted to do was play rugby. I took myself out of rugby, thinking that I’ll come back when my head is ready and when I can fix my blood disorder. It was 16 months from the last time that I played rugby at the Under-20 World Cup to the next time that I played a competitive game.”

Kingston and Harlequins were excellent, supportive and encouraging, so too his parents, Rob and Jennifer, upon whom he leaned heavily and from whom he drew the strength to battle on.

He explained: “Psychologically it was very, very hard for me. I had some very long, hard chats with my parents, difficult conversations. I can look back now and take strength from it; it made me more resilient in the face of adversity.

“My first goal was to be happy again because I was deeply, deeply unhappy. It affected my social life and my family life. I could see myself changing into someone I didn’t want to be, didn’t like. That scared me. Before I even considered rugby again, I wanted to be happy.

“My dream had been to be a professional rugby player. I had loaded all my eggs into one basket because of it. I was stressed, deeply unhappy with it [my dream] and resented it making my feel like this. It is something that I always wanted and it was the only thing that could break me and it did break me.”

He needed to get away and headed off to South East Asia with three friends. There was no return ticket or date. Saunders decided to take as long as he needed to feel better. It worked and he came back, “a new man. I had this surge of energy and all I wanted to do was play rugby again”. He hired a personal trainer, with whom he worked for two months to get fit.

He also needed to try and solve the blood disorder issue. By his own calculation he saw more than 15 medical professionals in trying to find a solution.

“I had seen world-renowned blood specialists and one told me that she wouldn’t feel comfortable with me riding a bike, never mind playing rugby. They said that all options had been tried and it hadn’t worked.

“It was very hard until we found another doctor, who put me on this other drug [Nplate]. It’s for cancer patients. I thought, ‘look it’s the last chance and I can try it’. It’s been an absolute dream for me. I take it [by injection] every 10 days now and have not looked back since.

“I am up at 200,000 in that normal range but I do have to take this drug every 10 days. I have been taking it for about two years now. Hopefully in a couple of years I can go back and wean myself off it if I can maintain those high [platelet] levels or [perhaps] if I can take it every three, five or six weeks. At the moment all I care about is playing rugby. So if I have to take it for the next 10 or 15 years, so be it.”

He paid a warm tribute to his parents.

“They were brilliant and with me every step of the way. I continually shared my pain, something we all took pretty much to heart. We made decisions together. It wasn’t me making a decision; it wasn’t them making a decision. I could see that they were hurting just as I was.”

Harlequins facilitated him resuming his rugby career. Paul Gustard, who took over as head coach in 2018, appreciated Saunders’ qualities – his grit and determination too no doubt as he had an injury interrupted 2018-2019 season – and signed him to a two-year contract (2021) earlier this year. He’s competing with Danny Care and Argentine Martin Landajo for game time.

“It gives me an opportunity to learn from two of the best. If I can compete with them I can compete with anyone. Those two guys have such good parts of their games, Danny in terms of tempo and Martin controlled and relaxed; if you could fuse those qualities together you’d get a really good player. That’s what I am trying to do.”

He might easily have been wearing the white of Ulster, who Harlequins play on Saturday afternoon in the Kingspan Stadium in the back-to-back Heineken Champions Cup matches. His mum Jennifer is from Belfast and his dad, Rob, grew up in the city, having been born in Nottingham. Saunders explained: “The last season before I signed a two-year deal with Harlequins I was in talks with Ulster about signing.”

“Paul Gustard seemed to really like me and signed me early. The direction he is taking the club, I like the way it is going. I thought it was going to be my best shot to get game time. It’s my boyhood club to be fair. I set my goal at being the number nine at Harlequins and that is something that I want to achieve.

“My big goal is to play for Ireland; that’s what I want to be in life, an Irish international. I don’t really care how I get there. For me I haven’t really had much conversation [with the IRFU] but to be fair I was out a lot of last season with a few injuries. Hopefully that will change this year.”

He’s played three matches for Harlequins so far this season and his fourth probably – he sat on the bench as an unused replacement for Harlequins’ European win over Bath – won’t be this weekend but should be when the English club host Ulster at The Stoop this day week, eight days before he celebrates his 23rd birthday.

Saunders is a talented prospect and all he craves is a chance to compile a body of work to support that assertion. Players make sacrifices by inclination but his have been considerable, the very essence of the phrase, blood, sweat and tears. And who knows, maybe 13 might prove to be his lucky number at some point in the future.