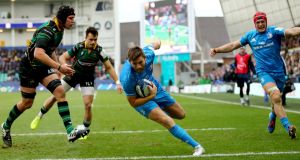 A bonus-point victory on English soil, with the Premiership leaders beaten all ends up long before the finish of this thrilling affair, is only half the story.

Even a potentially serious Johnny Sexton knee injury can be filed away as mere subplot. This ferocious battle appears to have damaged Ireland more than it impacted Leinster as Leo Cullen’s team did not miss a beat when Sexton was forced off early in the second half.

Within two minutes of Ross Byrne’s arrival at outhalf the fourth and fifth tries put the game out of Northampton’s reach. Byrne even missed the conversion of his own five pointer.

This is what happens when a team seeks to go toe to toe with the 2018 Champions Cup winners. All of Europe has been put on notice.

Leinster even out matched their bigger opponents in the physical exchanges. This was achieved by stunning shifts at the coalface from Devin Toner, Caelan Doris, Josh van der Flier and the outstanding Andrew Porter.

But the main story from this game has to be Jordan Larmour, after he pretty much tore the Saints apart all on his own. Rob Kearney might well be the best technical fullback on the planet but the 22-year-old’s time is unquestionably now.

Not three minutes were clocked when Larmour glided outside Northampton openside Jamie Gibson to send James Lowe racing clear from 60 metres out for the opening try.

This same sight occurred again three more times before half-time with Leinster’s poor handling on the last pass leaving the bonus point out there. They would make amends in spectacular fashion.

The English side were determined to avoid a humiliation on their own patch of land.

Garry Ringrose kept putting his body in the line of fire but twice, Ahsee Tuala then Teimana Harrison, ran over the Ireland centre to create a try for Tuala.

That was the opening six minutes as both teams almost announced: strap in for a classic.

It took nine minutes for the usual late smash on Sexton – compliments of Fijian giant Api Ratuniyarawa – to spark the Leinster captain to life.

He initiated blue waves of attacks but errors and a masterclass in killing ball by Harrison temporarily stemmed the tide.

No matter. Dan Biggar kept the scoreboard ticking over with three penalties.

But it was Rhys Ruddock’s power from close quarters that finally rewarded the latest electric run by Larmour with Sexton’s conversion making it 14-10.

Referee Alexandre Ruiz felt compelled to give Sexton a last warning before showing yellow cards after Doris (twice) and Porter were penalised for going off their feet. The ruck was a minefield all afternoon.

This allowed Biggar to put Northampton 16-14 ahead but Leinster went in three points to the good, thanks in the main to their young tighthead prop.

Porter proved to any doubters just why he is wearing the three jersey ahead of Tadhg Furlong. The Dubliner was heavily back-slapped by team-mates after a scrum penalty that eventually resulted in the 23-year-old muscling over for the third Leinster try.

Despite the contributions of Porter and Larmour, it was no surprise to hear that Van der Flier was named man of the match.

Northampton kept offering a physical threat – at times the pitch looked like a field hospital – and it eventually took its toll with Sexton forced off just as Cian Healy powered over for the bonus point three minutes into the second half.

Yet again, the score was born off Larmour brilliance in the wide channel.

As Northampton struggled to cope with the increased tempo, Byrne strolled over on the left wing. He missed the conversion but the fact Leinster didn’t miss a beat despite losing their leader was the mark of champions.

The re-enforcements turned it into a rout with late tries from Luke McGrath and Ed Byrne.