Leo Cullen: ‘I don’t know the extent of it, but we’ll find out more in the early part of next week’ 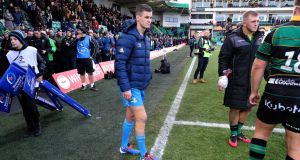 Leinster’s Jonathan Sexton pictured with strapping to his right knee after the match at Franklin’s Gardens. Photograph: Billy Stickland/Inpho

The extent of the injury to Johnny Sexton’s right knee will not be clear until Monday. The Leinster captain was forced off just three minutes into the second half of a hugely impressive 43-16 victory over Northampton Saints at Franklin’s Gardens.

“He has a bit of strapping on his knee,” said Leinster coach Leo Cullen. “I’m not sure to tell you the truth. He will get a scan tomorrow and we’ll see what sort of extent it is.

“Yeah, he’s a little uncomfortable there at the moment. I don’t know the extent of it, but we’ll find out more in the early part of next week.”

Sexton, who was wearing strapping on his right knee after the game, is unlikely to feature in the return leg of this Champions Cup back to back at the Aviva stadium next Saturday. If the injury proves as serious as initially feared the 34-year-old could miss out on being appointed national captain by new Ireland coach Andy Farrell.

The opening Six Nations match against Scotland is in eight weeks.

Interestingly, Harry Byrne was withdrawn from the Lansdowne team to face Terenure in the Energia AIL on Saturday afternoon. Byrne, a young brother of Ross, and Ciarán Frawley are all registered in Leinster’s European squad.

Remarkably Leinster secured the bonus point fourth try with 14 men, while Sexton was being treated on the pitch, with his replacement Ross Byrne claiming the fifth and decisive try just two minutes after coming on.

James Ryan was forced off on 73 minutes to undergo a head injury assessment.

“One of the spectators said to me as he walked past the box that it’s a part of the education. There are not many sides in the Premiership that can step it up like that,” Boyd said.

“We were in the game at half-time but I got the feeling they probably had more petrol left in the tank than we did. It was a reality check.

“It’s a learning for us that there’s another level of physicality and fitness required if we’re going to compete with teams like Leinster.

“We have to be optimistic that we can close the gap. When you play the best sides in Europe, like Leinster are, having Owen Franks, Courtney Lawes, Dave Ribbands unavailable makes a difference.

“Leinster defended outstandingly well in that block. We didn’t ask enough questions of them and we were a little bit inaccurate because of the time pressure they put on us.”

Boyd also revealed that Lawes will not return until later in the month because of a hamstring injury.