James Ryan: ‘First of all, I’d have to be selected as captain. It’s a lot of hearsay really’ 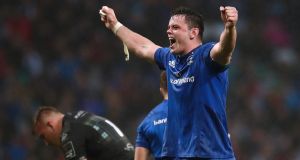 The conversation is brief. But at times it seems as if James Ryan feels he is being coaxed down a rabbit hole. His natural stillness, his unflappability begins to stir. He shifts in his chair.

“You are the same age as Drico when he took the job, if Andy came knocking on your door James what would you say?”, he is asked. Farrell and O’Driscoll. Two big names to summon up. Johnny Sexton and Peter O’Mahony. Two big names to step over.

Ryan has always been less comfortable speaking about himself than for others to talk about him. Today, that humility and reticence is being poked and shaken. The poise, that of an older player, is holding but his discomfort on the question of Irish captaincy and O’Driscoll and Farrell and any assumption he could find himself in the middle of the force of change that may sweep through the Irish camp has removed him from a comfort zone bound by a narrow set of guidelines.

They have been consistent. No self-promotion, no team disclosures, no personal revelations, no emotional downloads, no locker room talk, no third-party conversations revealed, no opinions other than positive ones on other players.

“Em . . . look . . . to be considered is an honour,” he says. “I mean I think anybody would want to captain their country you know. I’m not going to dance around it. But it’s something . . . as I said it’s an honour to be considered but not something that I’m really thinking about.”

“Do you see where the questions are coming from?” he’s asked.

“Its fine, as I said, it’s an honour to be considered. But it’s definitely not something I’m thinking about at all. So . . .”

It continues. “So you are being considered.”

“It’s an honour to be considered, by you lads.”

“But you’re in the leadership group, surely that would make it easier if it happens?”

“Possibly. First of all, I’d have to be selected as captain. It’s a lot of hearsay really.”

“Yeah, having that bit of experience, learn off guys like Besty [Rory Best] and Johnny [Sexton] and other leaders in the group. Yeah, you learn off that and maybe you feel more comfortable speaking then when it’s your time to speak. As I said, it’s an honour . . .”

At 23, O’Driscoll becomes the youngest Irish captain since Rob Saunders led Ireland against France in 1991. A prime difference, however, was that the then 22-year-old Saunders was one of six debutants on the Irish side, whereas O’Driscoll is rather more proven, with 30 caps and a Lions tour to his name – Irish Times, 2002.

Ryan with 21 caps has captained every serious team in which he has played from school in St Michael’s to the Irish under 20s. Like O’Driscoll he was capped for Ireland before he played competitively for Leinster. Like O’Driscoll was, Ryan is 23 years old and won’t be 24 until next July. Sexton is 34, Peter O’Mahony 30.

Ryan is a name on people’s lips, not entirely because of how he has been playing for Leinster and Ireland or any underground campaign. It’s as much a sequence of events; the World Cup, the changing of the coaching staff and how Farrell decides to balance the equation of continuity and change.

Ryan also has the natural mien of a leader. It is, say his team-mates, in his disposition, the way he thinks on and off the pitch, the demands he places on himself to be better and how he interacts with players.

He didn’t have to become somebody he wasn’t already. He’s very assertive in a quiet way, a real strong captain as well

“You think of some of the traditional characteristics where you bang the table and rally the troops to try and get some energy flowing,” says Nigel Carolan, the Connacht backs coach. “But with James it was the opposite. As a character himself he’s pretty quiet. If you are looking at the colours he’s blue which means he’s tends to be reserved but he’s extremely logical.”

In the pool phase Ireland beat New Zealand for the first time before losing to hosts England in the final.

“He’s extremely detailed himself about his understanding of the game and his ability to strip away all the insignificant parts and his ability to prioritise the important, not only in the game but at the right moment. It’s actually a bit of a gift he has,” adds Carolan.

“For example if he was in training in an attack module, he’s able to sift through everything that it could be and find out it is the one thing. Address this one thing and we’ll be better. He’s a leader by doing rather than talking. He’s doesn’t have to say a whole lot. He does a whole lot and he does it really well.

“When I spoke to him about the captaincy he was a little bit taken back. Not surprised but honoured and appreciative and accepted the challenge – and he did see it as a challenge with that group because the Irish U20s was the highest level he had played. He was also excited about it in so far as James gets excited. He didn’t have to rally the troops and bang the table. He wasn’t that type of person. He didn’t have to become somebody he wasn’t already. He’s very assertive in a quiet way, a real strong captain as well.”

Ryan’s description as a blue points to being cautious, precise, deliberate, questioning, analytical, all of which makes him the player he is. Leo Cullen, his Leinster coach, also an international lock and a captain, sees Ryan as classical and modern, an entirely different type of player to what he was in Leicester Tigers’ heyday.

But Cullen is cautious as well as proud of what Ryan has become and refuses to lionise the secondrow or present him as a one dimensional cartoon character, overblown and perfect.

“More dynamic. Stronger. Taller. Heavier. Leaner. Better muscle mass,” says Cullen. “James is a slightly different prospect to what I would have been. I was just a grafter. You see younger players coming through now, physically they are in better shape than we were.

“There is more information available to kids and the smart ones are able to piece it all together from nutrition to lifting, how to get bigger, stronger, faster. All the information is a million times better.

“James has got a good mindset. He is a good competitor. There are still lots of aspects of his game he can get better at. He is always willing to learn, to pick up pieces, the layers of experience you pick up from losing last season, losing the Champions Cup final, the trickier Six Nations, the World Cup.

“What is he picking up in those tougher times? Why are the teams he is involved in not coming out on top?”

O’Driscoll has weighed in saying Ryan is capable but what is the rush in his installation. He says Sexton could be captain for the year and Ryan the mainstay in the pack. He admits that when he was Irish captain at 23 he didn’t really know how to be a captain, that unlike Ryan he hadn’t captained underage teams and he led Ireland by the way he played and by the way he trained more than by what he said.

Richie McCaw also captained the All Blacks at 23 against Wales in November 2004 when regular captain Tana Umaga was rested.

Age is no restriction and Ryan’s membership of the leadership group is telling. In Leinster they are encouraged to speak and be decisive, become independent thinkers within the system. They are taught, largely by Stuart Lancaster, to have the courage of their convictions, voice opinions.

“He [Lancaster] has always been big on myself and everybody else finding their voice,” says Ryan. “A lot of us have grown in that respect in the last couple of seasons. I don’t think it came as naturally to me coming in originally. But I think that I’ve played a few seasons now I probably feel more comfortable. I do feel more.”

While captaincy doesn’t suit every player because they can become unfocused about what’s actually important to them, it does suit Ryan. Carolan describes a questionnaire players did in the under-20s, where there were 10 descriptions of character traits. Players were asked to assign one name to each characteristic or value. Ryan’s name appeared more than any other player across the spectrum.

“Not only did it [captaincy] not take away from his personal performance but I thought it added to it,” Carolan says. “He was very comfortable with the tag of captain. I thought it probably highlighted a lot of the leadership characteristics he already had and brought them to the front even more. I think he’s definitely better for it and that he thrives in that.”

From Farrell’s perspective, bring Sexton in as captain and most would agree. Ryan, that would be making a statement.