Match details, team news, how to watch, and the big talking points for Leinster v Racing 92 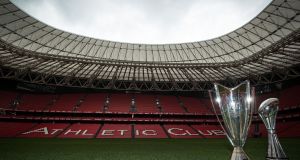 This year’s Champions Cup final will be played in Bilbao. Photograph: Inpho

Saturday’s Champions Cup final between Leinster and Racing 92 will be held at the rebuilt 53,000-seater San Mamés Stadium in Bilbao. This is the first time a country without a participating team in the competition will host the decider. Kick-off is at 4.45pm Irish time.

Leinster qualified for the final after topping their pool with six wins from six, most impressive of all an 18-8 win over reigning English Premiership winners Exeter at Sandy Park . They then put 30 points past reigning champions Saracens in the Aviva, before beating last season’s Pro12 winners Scarlets by 22 points.

Racing 92 meanwhile finished second in their pool to Munster, after losing away to Castres and at Thomond Park. They then beat Clermont Auvergne 17-28 in an all-French quarter-final at Stade Marcel-Michelin, before a strong start saw them overcome Munster by five points in Bordeaux to reach the final.

The match will be shown live on BT Sport and Sky Sports, with coverage getting underway at 4pm on Sky Sports Action and at the same time on BT Sport 2. You can also follow our live blog on https://www.irishtimes.com/sport.

As for getting there? A very limited number of tickets remain on public sale here.

As reported earlier this week by John O’Sullivan and Gavin Cummiskey - Jordan Larmour starts with James Lowe missing out on the matchday squad altogether.

Because of ongoing concerns relating to Luke McGrath’s ankle injury, Jamison Gibson-Park is included in the replacements and Leinster are only permitted two foreign players under the tournament rules.

The big news on the Racing 92 side is the loss of their captain, playmaker and primary goalkicker Maxime Machenaud to injury.

The 5ft 7in Marc Andreu retains his place on the wing, despite speculation that the 6ft Puma, Juan Imhoff would come in to add to Racing’s aerial game. The other selection issue was at tighthead, where Racing have gone with Cedate Gomes Sa ahead of Ben Tameifuna.

Battle in the skies

The lineout will be one of the most important battles this weekend, with former Munster lock Donnacha Ryan, Fiji 7s Olympic gold medallist Leone Nakarawa and the dynamic Yannick Nyanga adding quality to Racing.

Nevertheless, in his stats column this week John O’Sullivan has discovered that Leinster did not lose a single lineout in the victories over Saracens and the Scarlets. “This is a hugely impressive statistic in itself, but given additional gravitas when weighed against the fact that the Irish province uses the platform as a starting point for many of their strike plays,” he explains.

Since Donnacha Ryan made his European debut for Racing, they have won 14 of their last 17 matches. Before that they’d lost two of their first three pool games. The former Munster man has been a huge hit in his first season in Paris.

“Munster has always dominated the Champions Cup and the Heineken Cup before, but to have a guy like him in the team is an amazing lift for the boys,” says the French club’s assistant coach Chris Masoe. “The boys love him. It’s something you can’t teach someone but he’s great for the team.”

Man in the middle

Wayne Barnes of England will referee the final - his second European Cup final having refereed the 2010 decider between Toulouse and Biarritz.

His assistant referees in Bilbao will be the Irish born JP Doyle and Tom Foley - both of whom are also of the English RFU.

Barnes has twice refereed Racing in this season’s tournament, both wins, but matches in which the French club conceded a combined 27 penalties; a 14-14 penalty count in the pool match against Castres, and conceding 13 to 8 in the Clermont match.

Barnes has taken charge of one Leinster match, the Irish province’s win over Montpellier at the RDS, where the home side sinned less (7-10) than their opponents. Tournament penalty totals for the respective teams are 59 (Leinster) and 86 (Racing).

The two teams make up the five players shortlisted for this year’s EPCR European Player of the Year. Three of those are Leinster - Scott Fardy, Tadhg Furlong and Johnny Sexton.

While Machenaud and Nakarawa represent Racing. The winner is likely to be based on their performance in the final.

Early last week it looked like a win for Leo Cullen’s side would guarantee Ulster a place in next season’s competition, however after last weekend's results in the Premiership and Top 14, the Pro14 will no longer be allocated an eighth entry should Leinster win.

After losing to Saracens on Saturday,  Gloucester missed out on a place in the top six of the Premiership, and therefore they took the 20th qualifying spot in the Champions Cup as Challenge Cup finalists. Ulster's European hopes now rest upon their Ospreys play-off.

What does D’Arcy think?

In his column this week, Gordon D’Arcy explains why Racing 92 will not live with Leinster for the full 80 minutes. He draws parallels with the class of 2009 explaining why the leaders from that campaign should give the Irish province the edge come Saturday;

“This team should win a fourth European title. The number 10 and fullback return along with a superior Cian Healy and Devin Toner, who each carry vital experience from those days.”