Gerry Thornley: No such thing as a quiet week in Irish rugby 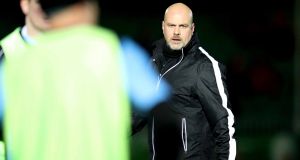 That was meant to have been a quiet week; just the Pro14 quarter-final between Munster and Edinburgh, and the Ulster Bank League final featuring Lansdowne and Cork Constitution, before Leinster hogged this week in the build-up to their fourth European Champions Cup final - against Racing 92 next Saturday. But, of course, Irish rugby doesn’t do quiet weeks.

Instead it was the week when word broke of Kieran Keane’s departure from Connacht after just one season. There were the latest developments in the ongoing saga of where Paddy Jackson and Stuart Olding may or may not end up, after being linked with Sale. There was also Ulster confirming that Dan McFarland would be their next head coach, followed by news that Andrew Trimble was retiring at the end of the season and Robbie Diack would be returning to South Africa, all to the backdrop that Joey Carbery may be considering a one-year switch to the province.

Then finally some rugby; in the shape of Munster beating Edinburgh and Lansdowne winning the Ulster Bank League trophy for a third time under Mike Ruddock’s watch, in a taut final with Cork Constitution at a sun-drenched Aviva Stadium. Over the course of an 80 minute tussle which was balanced throughout on a knife edge, there was never more than a score, and usually just a kick, between these two heavyweights of the club game.

Having also won the Leinster League and Bateman Cup, they are seeking a quadruple when facing Terenure in the final of the Leinster Cup. This has been re-arranged for Thursday, which Lansdowne have understandably appealed against.

Munster’s win was significant on a number of fronts. In extending their own season, Saturday’s 20-16 win also ensured the likes of Conor Murray, Peter O’Mahony, CJ Stander, Keith Earls and others bound for Australia will play at least one more match – a full-on semi-final with Leinster at the RDS no less – between now and the first Test against the Wallabies in Brisbane, as opposed to that being their first game in five weeks.

No doubt to the relief of tournament sponsors, organisers and broadcasters alike, and not least the departing Sky Sports, it also ensured the Pro14 of one Irish team in the final at the Aviva Stadium on May 26th, a fortnight before that first Test. The alternative, Edinburgh v Glasgow or Scarlets, would have been a hard sell, and no doubt led to vast swathes of empty green seats.

Furthermore, due to results on the final day of the regular season in both the Premiership and the Top 14, Ulster will have to play the Ospreys in a one-off play-off for a place in next season’s European Champions Cup on Sunday May 20th, at the Kingspan Stadium. This also ensures that the Australian-bound Ulster contingent also keep ticking over, rather than Rory Best, Iain Henderson, Jacob Stockdale and co being without a game for six weeks going into that first of three Tests.

That game, of course, is also huge in the context of Ulster’s season and their immediate future, as qualification for the premier European competition rather being consigned to the secondary Challenge Cup would have huge implications for the mood music – not exactly harmonious right now – around Belfast.

McFarland’s appointment will not have rocked the boat of their supporter base, judging by the more stellar coaching names touted on their fan forums. But he looks like a very good appointment. He is considered a high class coach and shrewd individual by seemingly all those at Connacht, Glasgow and Scotland who have come across him. His packs have always been very efficient and usually amounted to more than the sum of their individual parts.

McFarland has cut his teeth as an assistant, and will have watched, listened and learned from the impassioned Eric Elwood, a visionary like Pat Lam and Gregor Townsend amongst others. He knows the Pro14 inside out, and has had a taste of international rugby alongside Townsend, himself a meticulously detailed and clever coach.

The one downside of his appointment is that he has had to give the Scottish RFU nine months notice, and they may not be of a mind to release him unless they extract adequate compensation from the IRFU. By all accounts, relations between the two unions are at an all-time low after the Scots sided with the greater financial carrot dangled in front of them by Bernard Laporte for their votes to host the 2023 World Cup.

Nor will the Scots be enamoured about losing their forwards coach before next year’s World Cup in Japan, not least as Ireland and Scotland meet in a pivotal and potentially decisive pool opener.

The prospect of another less than smooth transition, following on from the arrival of Les Kiss after half a season in abstentia during the 2015-16 season, would only compound the ongoing upheavals at Ulster.

Including the interim appointments of Steve Williams, Neil Doak and Jonno Gibbes, McFarland will be Ulster’s ninth head coach in 12 seasons. Any wonder that results have declined?

Consider too, that since this point 12 months ago, they have effectively lost an entire backline in Ruan Pienaar (cut adrift by the IRFU), Jackson, Olding, Jared Payne (who hasn’t played all season), the retiring duo of Tommy Bowe and Trimble, as well as the departing Charles Piatau. That demands an extraordinary amount of rebuilding.

Viewed in that light, Carbery would be an interesting arrival. One can understand why Joe Schmidt and David Nucifora would want Johnny Sexton’s putative World Cup understudy to be having more regular game time at outhalf in the intervening period. He has started only once there for Leinster all season.

Ideally though, Ulster would seem to require a more experienced type in the mould of Jimmy Gopperth, not that too many of his ilk appear to be available. Danny Cipriani and Quade Cooper are on the market, but their maverick styles may not be exactly what Ulster are looking for.

Bearing all that in mind, Ulster is not exactly the most attractive proposition in world rugby for a seasoned outhalf or an aspiring coach. Albeit a coach is only as good as the players at his disposal, McFarland nonetheless looks a very good fit.