Leinster didn't lose one lineout against Saracens and Scarlets 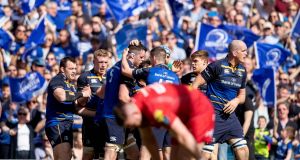 Leinster players congratulating James Ryan after he scored a try against Scarlets. The genesis of the try was a sharp lineout move. Photograph: Morgan Treacy/Inpho

Perusing the statistics relating to the knock-out stages of the season’s Champions Cup ahead of Saturday’s final between Leinster and Racing 92 in the San Mamés stadium in Bilbao, two numbers jumped out when it came to assessing the relative merits of the combatants in their quarter-final and semi-final matches.

The most striking is that Leinster did not lose a lineout in the victories over Saracens and the Scarlets. This is a hugely impressive statistic in itself, but given additional gravitas when weighed against the fact that the Irish province uses the platform as a starting point for many of their strike plays.

A classic illustration is Leinster’s first try in the semi-final win over the Scarlets, the genesis of which was a sharp lineout move that created space on the outside. Even though Fergus McFadden was hauled down short of the line, Leo Cullen’s side recycled possession, and James Ryan powered his way through a couple of tacklers with a little help on the initial shunt.

Saracens and the Scarlets both have excellent defensive lineouts, so the Leinster achievement is all the more laudable.

A Donnacha Ryan-marshalled Racing 92 unit also comes with a top notch reputation – Yannick Nyanga ranges up and down the lineout and is a superb athlete, quick across the ground and easy to get in the air – as they demonstrated when pilfering/disrupting four of Munster’s 13 throws. However, Racing have shown a vulnerability on Camille Chat’s throw, coughing up five lineouts in the two matches highlighted in the modest lineout percentages represented in the graphic.

The other number that jumps out is Leinster’s 99 per cent success rate in the rucks/mauls category across the knockout matches – that translates to losing one in 114 (Saracens) and one in 126 (Scarlets).

This is a remarkable feat given that both of Leinster’s aforementioned opponents are noted for their breakdown work, and it will take a similarly Trojan effort against a Racing backrow of Wenceslas Lauret, Bernard Le Roux and Nyanga and prop Eddie Ben Arous.

“The breakdown was brilliant [against the Scarlets]; the last few times that we have played Scarlets [that didn’t go well]. When we played them during the Six Nations Tadhg Beirne had six turnovers. The last time that James Davies played against us he had five as well.

“It’s a testament to how much work the lads did during the week on the breakdown. I think it is about getting into the breakdown early; we were very good at the breakdown. In terms of their [Racing] backrow, Yannick Nyanga was incredible against Munster. He has been a brilliant player for years, a great athlete.

“Wenceslas Lauret at six is an all-round athlete. He does everything really well, very good in the lineout, good on the ground and a good ball carrier. Bernard Le Roux at seven is a very good all-round player. We will need a similar breakdown performance to Scarlets.”

The calibre of Racing’s defence in those matches is abundantly clear in the figures, as is their potency in terms of line-breaks and defenders beaten, including a stunning 48 in the latter category, in the away quarter-final win over Clermont Auvergne in the Stade Marcel Michelin.

However, one area in which the Parisian club will have to improve massively is their discipline. In their quarter-final win over Clermont, a match that Saturday’s referee Wayne Barnes presided over, they were penalised on 13 occasions and ran up the exact same figure in the semi-final win over Munster.

English man Barnes has twice refereed Racing in this season’s tournament, both wins, but matches in which the French club conceded a combined 27 penalties; a 14-14 penalty count in the pool match against Castres, and conceding 13 to 8 in the Clermont match.

It’s interesting that an occasional gripe of French sides is that they receive unsympathetic officiating fostered by a language barrier from English officials but that’s not applicable this season as six of their eight matches have been presided over by English-affiliated referees; Barnes (2), Irish-born JP Doyle (2), Luke Pearce and Matthew Carley, with Barnes and Doyle in particular offering direction in French where relevant. Racing with be well versed with the “English style”.

Barnes has taken charge of one Leinster match, the Irish province’s win over Montpellier at the RDS, where the home side sinned less (7-10) than their opponents. Tournament penalty totals for the respective teams are 59 (Leinster) and 86 (Racing).

So for Leinster it’s largely a case of more of the same, while it is Racing that require the greater incremental improvements across the majority of the categories highlighted.