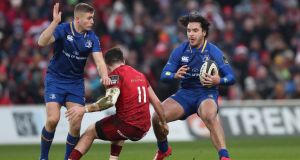 James Lowe looks set to miss out as 20-year-old Jordan Larmour is slated to start in the Leinster team for Saturday’s Champions Cup final against Racing 92 at the San Mames stadium in Bilbao.

Rory O’Loughlin is also expected to be named among the replacements while a decision will be taken on Rhys Ruddock - he reinjured his hamstring when coming on in the quarter-final victory over Saracens - will be taken after training on Thursday. Ross Molony, who was on the bench against the Scarlets, will be among the replacements if Ruddock cannot prove his fitness.

It’s not a selection issue for Lowe but rather that because of ongoing concerns relating to Luke McGrath’s ankle injury, Jamison Gibson-Park will be included in the replacements. As Leinster are only permitted two foreign players under the tournament rules, the 25-year-old New Zealander Lowe will be the unfortunate player to miss out, just as he did for the semi-final against Scarlets.

McGrath missed that match with Gibson-Park performing impressively while Nick McCarthy was on the bench. Despite assurances earlier in the week that McGrath had recovered from an ankle injury sustained in the quarter-final win over Saracens, there appears to be some concern that the scrumhalf may not last the 80-minutes and that Gibson-Park’s big match experience from his time in Super Rugby provided irresistible when striking a balance in the match-day 23.

Leinster senior coach Stuart Lancaster said earlier in the week: “Yeah, we’re pretty optimistic now. Luke trained on Tuesday and Wednesday last week. He trained partly on the Tuesday, fully on the Wednesday. There has been no reaction. There’s no doubt in my mind that he’ll be fit and available for selection.

“Luke’s a high quality player, the biggest bonus for me was the performance of Jamison in the semi-final; to have him step up and play at that level against such a good team. I know that was really positive for him, but having Luke come back into the equation as an experienced player is great for us. We’ve got some decisions to make there.”

Larmour, who made his Ireland debut off the bench against Italy before going on to make two further appearances as a replacement during the national side’s recent Grand Slam triumph in the Six Nations Championship, has made 19 appearances for Leinster this season (11 starts).

He came on a half-time replacement for the injured Fergus McFadden in the Champions Cup semi-final win over the Scarlets, played 80-minutes at fullback against the Glasgow Warriors and on the right wing against Montpellier in the pool stages, while also twice appearing off the bench in the victories over the Exeter Chiefs.

Larmour is expected to start on the right wing with Leinster captain, Isa Nacewa handed the task of corralling Racing’s try scoring phenomenon Teddy Thomas on the other flank. The teams will be officially announced at midday on Friday.