Rokocoko: Leinster are intelligent team who bring something new 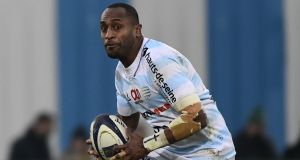 Racing’s Joe Rokocoko: “This is a totally different team to what we’d had.” Photograph: Getty Images

Leinster will bring more to the European Champions Cup final than Saracens did when they beat Racing two years ago in the 2016 final. Despite the constant analysis that teams do on each other’s play and setpieces, former All Black Joe Rokocoko says they are expecting Leinster to bring something new when the sides meet in Bilbao.

Rokocoko was part of the Racing team that lost 21-9 as the English Premiership club became champions of Europe for the first time. Leinster are now trying to equal Saracen’s record of being the only side to win all nine games in the tournament on their way to becoming champions.

“Leinster bring a lot more,” said Rokocoko. “The hard thing is that despite video analysis they do come up with different moves from the back pocket...they are such an intelligent team, and have great forwards.

“Saracens went for kicking strengths. Leinster have a lot more options, running options, and they can change the game. They’ve got a lot of experienced international players in their group. For us it’s going to be tough.”

The winger, who finished his New Zealand Test career in 2010, concurs with what Leinster senior coach Stuart Lancaster said about the importance of playing strongly at the beginning of the match. A little momentum can strongly swing a match in one direction. Munster found that to their cost when they allowed Teddy Thomas in for two early tries in the Thomond Park semi-final, a start from which they could not recover.

“Yeah, a good start brings momentum,” said Rokocoko. “Then there’s a little voice in the back of your head saying good day or it’s going to be a long day. That momentum just shifts and brings excitement to players on the team.

“But winning the collisions, collisions are the main thing. We have to lead from the front, have to win collisions and know momentum is really crucial for us.”

Rokocoko believes that although Racing struggled this season to emerge from the pool phase, they are a stronger side this time around. Two years ago they were pleased to just make it to the final. That attitude has changed.

“We have had good preparation this year. Over two years we built and built, rotated very well, with some of the new French boys coming in. This is a totally different team to what we’d had.”

1 Rory McIlroy puts integrity ahead of glory in US PGA second round
2 Buttler and Woakes drag England from the brink to set up thrilling Pakistan win
3 Bayern Munich complete formalities with rout over Chelsea
4 From Maestro to Mister: Andrea Pirlo named new Juventus boss
5 The game they loved so well: How cricket united Hume, McGuinness and McCann
Real news has value SUBSCRIBE