Devin Toner prepared for battle in the skies with Donnacha Ryan

Lineout contest will prove pivotal when Leinster take on Racing 92 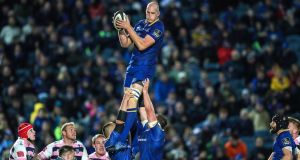 Devin Toner: “It’s a bit of a double-edged sword. Do I bluff him or do I not bluff him?”.

Devin Toner knows the lineout will be one of the most highly contested areas when Leinster meet Racing 92 on Saturday in Bilboa. With former Munster lock Donnacha Ryan, Fiji 7s Olympic gold medallist Leone Nakarawa and the dynamic Yannick Nyanga adding quality to Racing, Toner knows that only precision, particularly in his specialist area, will win the day.

An issue on both sides is that the forensic Ryan will know Leinster’s lineout in detail, while Toner over the years has become familiar with the traits of an Ryan lineout from the many games analysing Munster and playing with him in national camps.

The question is what to do when each side is unlikely to be surprised by the other. Toner’s answer is to do it better not to do it differently.

“Donnacha, a lot of us have played with him for a good few years with Ireland and he would know how I run a lineout and I suppose I know how he runs a lineout as well,” explains the 31-year-old. “It’s a bit of a double-edged sword. Do I bluff him or do I not bluff him?

“They are very good at mirroring, just getting up and putting pressure on. They do like to close the gap as well and try and disrupt as much as they can. On top of that, they are huge bodies. They are a big team.”

Ryan has an unusual capacity to analyse lineouts and spends much of his spare time poring over sequences. His interest has become almost a passion and, even when injured and not involved, is an influencing voice in the set-piece discussions.

Given the strength of Johnny Sexton’s kicking game, if Leinster decide at any stage to play territory, an attacking lineout without disruption would give them a threatening platform.

“When he [Ryan] was here, I got on really well with him,” says Toner. “He’d talk the hind legs off a donkey. He was really good. Even if he was injured and not involved, he would always be helping out, always be in your ear, telling you what might work, what mightn’t work.

“He does a lot of work on video as well. He spends a lot of time looking over past lineouts and what went well, what worked, what didn’t. He has a lot of years of experience doing that sort of stuff.

“When we were at Ireland, we would be coming up with calls and he would say, ‘Oh yeah, you did that two years ago with Leinster. I don’t even remember that. How do you remember it?’ He puts his homework in anyway.”

1 Tipping Point: DeChambeau’s transformation raises questions, but who will ask them?
2 Ken Early: Resurgent United can be the top team – in Manchester
3 Coronavirus implications will delay completion of CVC’s €450m Six Nations deal
4 Monica Seles: The warrior queen who could have been the best ever
5 Here is your handy guide to sport on television this week
Real news has value SUBSCRIBE