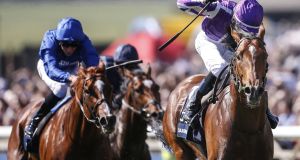 A remarkable 18th success in the historic Beresford Stakes could be on the cards for Aidan O’Brien this Sunday.

The €110,000 Group Two feature at Naas has an illustrious pedigree of throwing up future Classic champions and features legends of the sport such as Sea The Stars and Nijinsky on its roll of honour.

There has been no more dominant figure however than O’Brien who first won the Beresford in 1996 with Johan Cruyff and last year scored with the subsequent Guineas hero Saxon Warrior.

The now retired son of Deep Impact was completing a run of seven Beresford wins in a row for his trainer, who has half of the 16 entries left in the mile highlight after Tuesday’s forfeit stage.

They include Cape Of Good Hope, the brother to O’Brien’s seven-time Group One star Highland Reel. He hasn’t run since chasing home the subsequent National Stakes winner Quorto at Newmarket in July.

However it looks like the Curragh winner Mount Everest could lead the O’Brien team with the trainer reporting on Tuesday: “We would be thinking that Mount Everest would be our most likely to run. He has progressed nicely and is a colt that looks very comfortable at a mile.”

Another contender is Sovereign, who landed his maiden by no less than 14 lengths at Galway last week.

Dermot Weld’s Zuenoon also broke his maiden at Galway during the summer festival there and subsequently followed up at Killarney.

Weld sponsors the Group Three Park Stakes on the same Naas programme and won it in 2016 with the high class filly Eziyra.

His sole contender this time is the unraced Racine, who features among 14 still left in the race. Last weekend’s seven-length Gowran winner Pink Dogwood, a sister of the Irish Derby winner Latrobe, is among four Ballydoyle options. The quartet also includes the Moyglare Stud Stakes third Hermosa.

“We’ll see how Pink Dogwood is but it is very possible she will run at Naas. She’s progressing lovely and is coming along with every run. Hermosa could possibly go race with her,” O’Brien said.

Sunday’s Naas card also includes two other Group Three contests, the Loughbrown Stakes and the Renaissance Stakes, which is likely to see Gordon Lord Byron line up after failing to hit the mark in the Czech Republic last weekend.

O’Brien’s Ten Sovereigns has hardened to as low as 4-6 favourite for Saturday’s Group One Juddmonte Middle Park Stakes, a race in which Rumble Inthejungle is likely to try and bounce back from a disappointing effort in Doncaster’s Flying Childers Stakes when last of nine.

“We scoped him after and everything seemed fine with him. We thought maybe the ground wasn’t great for him and we were probably drawn the wrong side. But he’s done a bit of fast work on Saturday and pleased us so it’s all systems go for the Middle Park,” said his trainer Richard Spencer.

Rumble Inthejungle was restless in the stalls at Doncaster and bumped her head but Spencer added: “A few things didn’t go our way but I’m not really looking into that too much.

“The horse has come back and seems fine. Hopefully it stops raining this week and it will be a dry week and we can go to the race with a good chance.”

In other news Michael O’Leary’s Gigginstown Stud team have yet to make a call on whether Samcro stays over flights or goes novice chasing this winter.

However, Down Royal’s JNwine Champion Chase fixture at the start of November could be where the horse returns to action.

“Gordon [Elliott] tends to run his nice ones at Down Royal and I know that’s in his head as long as all goes well,” said Gigginstown’s spokesman Eddie O’Leary.

“There hasn’t been a conversation about what we’ll do with him yet. And there won’t be until Gordon asks for one. All we hope is that he stays sound and we can have that discussion,” he added.

Another Gigginstown star, Road To Respect, is likely to line up for the Champion Chase itself at Down Royal.

“We’ll see how we go but I’d imagine he’ll probably go up the north for the John Nicholson. Whether he’ll have a run before that I’m not sure,” said his trainer Noel Meade.