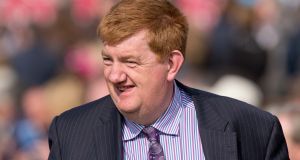 Irish racing was rocked on Wednesday when trainer John ‘Shark’ Hanlon was given a suspended 18 month sentence of his licence after his Galway festival winner Camlann tested positive for elevated levels of cobalt.

Hanlon was also fined €7,000 and ordered to pay €2,000 in costs on behalf of the Irish Horseracing Regulatory Board. The Co Carlow-based trainer has signalled his intention to appeal the penalties.

On a busy day at IHRB headquarters, top trainer Gordon Elliott was fined €1,000 after the JP McManus-owned Timiyan was disqualified from first place in July’s Midlands National at Kilbeggan. The horse tested positive for the anti-inflammatory triamcinolone acetoinide (TCA).

The Aga Khan-owned Kisanga, trained by Dermot Weld, was also disqualified from a Curragh win in June after testing positive for testosterone.

Weld was not penalised as an IHRB investigation found the substance was naturally occurring due to a ‘granulosa cell tumour’ in the horse and the referrals committee accepted he was unaware of the condition.

The Hanlon-trained Camlann won at Galway last month and a sample taken from the horse following his victory was found to contain cobalt, a substance prohibited on raceday when above a certain level.

Cobalt is a trace mineral that exists naturally in horses but when administered in large quantities can increase red blood cells, which can improve performance. It has proved a controversial substance in racing around the world in recent years.

A Referrals Committee statement said “the current case in question was serious in nature resulting in a strong argument for the withdrawal of licence from the trainer”.

The report from the committee said that in his evidence, Hanlon stated the horse was receiving an oral supplement which contained cobalt and vitamin B12, but that it was not administered to the horse on the day of the race and that he did not know the source of the adverse analytical finding.

Hanlon immediately signalled his intention to appeal and said: “The only comment I’m making is that we’re definitely going to appeal. My reason being it was only three over the threshold of a hundred and we’ve got to appeal.”

Camlann was disqualified from the race in question, the Open Gate Pure Brew Handicap, with original runner-up Make It Hurrah promoted to first place.

Having elected to use its powers to suspend the ban for three years, Hanlon was advised that “should he come to the notice of the referrals committee for a similar breach within three years of today’s date the 18-month suspension will be activated in addition to any further sanction imposed for the later breach”.

Last month the IHRB announced it was organising a number of seminars to educate trainers, vets and stable staff on the dangers of using prohibited substances after a spike in positive drug tests this year.

A procurement process is currently ongoing to appoint new testing services for Irish racing with that process expected to be finished by the end of the year. An evaluation committee is examining tenders from laboratories around Europe.