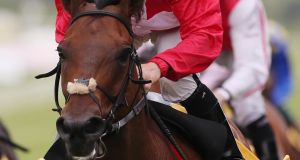 Gordon Lord Byron will race in the Czech Republic for the first time on Saturday. Photograph: Lorraine O’Sullivan/Inpho

There isn’t much that Gordon Lord Byron hasn’t done during his stalwart career but the former triple-Group One winner will tackle new ground in the Czech Republic on Saturday.

Tom Hogan’s ten-year-old veteran is declared to line up in the seven furlong ‘EJC Million’ and flew to Prague in style on Friday.

It will be the eighth different country Gordon Lord Byron has raced in and Tadhg O’Shea is set to ride the horse on what will be his 91st career start.

“It’s going to be his 27th different racetrack as well. Dr (Cyrus) Poonawalla (owner) has business interests out there and is keen to run so we’re flying him out,” Hogan said on Friday.

“It’s worth about €45,000 to the winner but Dr Poonawalla is keen to run him. I’m told it’s an expansive track with a good surface and a great covering of grass so we’ll give it a go.

“There are two German horses in the race too with ratings in the low 100’s but our horse is in good form and hopefully it goes well,” he added.

In his career pomp Gordon Lord Byron won Group One races in France, England and Australia. He hasn’t won in almost a year and a half but has been runner-up in last three starts including behind Expert Eye at York last month.

Saturday’s local action is in Gowran where conditions are set to be testing for the featured Group Three Cordell Lavarack & Lanwades Stud Stakes.

A total of 11 fillies line up including a trio from Ballydoyle. However the season’s leading jockey Donnacha O’Brien sticks with Ship Of Dreams for his brother Joseph.

Ship Of Dreams was a neck short of her older rival Panstarr at Listowel last week. That proved she can handle very deep ground and she sports first-time blinkers now.

Burning Question thrived on the Listowel mud and won a handicap by 12 lengths. She has been hiked a massive 21lbs in the ratings for that and a new 102 mark makes her something of a stand out in Gowran’s conditions event.

Navan hosts its first National Hunt card of the autumn on Sunday and Trainwreck looks an interesting contender for the Beginners Chase.

The track could also play to the strengths of Big Bucks’ younger brother, Buck’s Billionaire, in the bumper.