Hit The Bid looking for more favourable conditions at Newbury 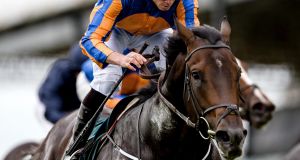 Aidan O’Brien’s Sioux Nation could be set for a run at Newbury on Saturday. Photograph: Tom Beary/Inpho

Curragh trainer Darren Bunyan is set to make a quick turnaround with his stable star Hit The Bid if ground conditions are suitable for the horse at Newbury on Saturday.

Despite not liking the easy going in Sunday’s Flying Five Stakes at his local track Hit The Bid ran a fine race before fading slightly to fourth in the closing stages behind Havana Grey.

The runner-up Son Of Rest is heading for the Ayr Gold Cup on Saturday but it is Newbury’s Group Three Dubai International Airport World Trophy Stakes that Bunyan has in mind for Hit The Bid’s cross-channel excursion.

“He ran a blinder [at the Curragh]. In fairness to him he never handled the ground at all. It was too soft for him.

“It’s a fair run to be beaten a length and a neck in a Group One in conditions you’re not in love with. He also had the worse of the draw,” he said on Wednesday.

“We’re looking at Newbury now because at this time of year you never known when you’ll get your ground.

“The ground is perfect for him now but you just don’t know at this time of year. You could be standing in the wrong field and get soaked. If the ground stays as it is we’ll be going,” Bunyan added.

Hit The Bid could be joined in Saturday’s race by Aidan O’Brien’s Sioux Nation, while the Ballydoyle trainer also has the option of running Sergei Prokofiev in the Group Two Mill Reef Stakes on the same Newbury card.

The last two renewals of the second leg of Irish flat racing’s international showpiece have taken place with a restricted crowd capacity during the Curragh’s reconstruction.

“That will be a big plus, not just for Champions Weekend but for the whole year. It’s something to look forward and it will give added momentum,” said Kavanagh, who was satisfied with how the fifth year of the €4.8 million weekend unfolded.

“There are things to work on but overall I felt it was good. The Champion Stakes was really high quality. It seems to do it every year. I think there was a good spread of winners and some really good stories, including the two syndicates bookending the two days,” he said.

“You can look at the Leger and the Flying Five and say they weren’t the strongest renewals, and obviously the Flying Five was in its first year as a Group One, so there’s something to work on there,” Kavanagh added.

The HRI boss also said the board of the Curragh board had met in the aftermath of Champions Weekend and stressed its commitment to fixing the new parade ring at the track which has been criticised for being too small and unable to cater for fields of more than 22 horses.

“We’ve looked at options and sent some of them to the design team to come back to us,” said Kavanagh, who is on the Curragh board.

“These things happen in a project. You have swings and roundabout and things get tweaked and changed as you go along. But there’s a determination to get it right,” he added.

The country’s top professional jump jockeys are absent from Thursday’s Clonmel fixture although Willie Mullins is likely to play a significant role.

The champion trainer will hope to win with Koroleva and Kerry Star although Airlie Beach’s half sister Irish Lass could find Brex Drago too good in a novice hurdle.

Churchtown Glen hit the headlines last year when suspended from racing for 90 days under ‘no-trier’ rules at Cork in November.

Mick Winters’s runner goes in the opening hurdle under Brian Hayes but Ourauldman might prove too good.