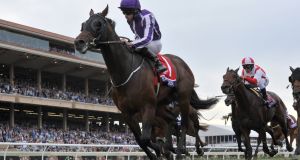 The priority put on Mendelssohn’s potential Breeders Cup Classic challenge is underlined by Ryan Moore opting to go to New York on Saturday night rather than stay in Newmarket for the odds-on Ten Sovereigns in the Middle Park Stakes.

Ten Sovereigns is shaping as Coolmore Stud’s top 2,000 Guineas prospect for 2019. The unbeaten colt will stretch Aidan O’Brien’s Middle Park record number of wins to six if successful on Saturday afternoon under the trainer’s son, Donnacha.

Ireland’s champion jockey-elect also steps in for Moore on Fairyland, one of a trio of Ballydoyle fillies in the other Group One on the same prestigious Newmarket card.

O’Brien Snr is chasing three in a row in that Cheveley Park Stakes while three other regally-bred Ballydoyle juveniles line up in the Royal Lodge.

Even Kenya will try his luck at a rare handicap double in the Cambridgeshire having won the Irish equivalent at the start of the month.

Mendelssohn is as high as 16-1 in some lists for November’s dirt Classic at which O’Brien has fired some of his most famous bullets over the years only to experience repeated frustration.

The prestige of finally breaking his duck in America’s most valuable race is possibly even more incalculable than the value of the horse eventually able to do it. So perhaps it’s no surprise Moore is on his travels.

That the Classic is this year held over the same Churchill Downs track at which Mendelssohn endured a torrid experience back in May will only add to the resonance should he be able to beat the top US horses at their own dirt game in six weeks time.

The potential bottom line value of that came earlier this week when Coolmore announced the Scat Daddy colt will join their US stallion team next week. Not surprisingly they held fire with an actual fee however, instead stating it’s “to be announced”.

A Classic win for such a beautifully bred and made colt would make for some announcement. Winning on Saturday night might add a zero here or there as well.

The Jockey Club represents the latest step back from that “Durby” disaster, the Irish horse progressing from an ordinary Belmont effort in July to run an honourable second to Catholic Boy in the Travers at Saratoga last month.

Catholic Boy skips this and instead it is the 2017 winner Diversify who will provide a stern test of Mendelssohn’s Classic credentials.

Any local scepticism of Mendelssohn – and the hype that accompanied him to Kentucky in May on the back of a dominant Dubai victory – probably pales in comparison to Thunder Snow.

He didn’t even finish the 2017 Derby at Churchill Downs, famously having to be pulled up after a furlong after bucking his way out of the gates.

However, with Catholic Boy absent, both bloodstock powerhouses look to have found a perfect US opportunity in a Grade One that has never been won by a European based runner and which could provide a vital gauge of their ultimate Classic ambitions.

The free-wheeling Diversify is likely to try and spoil any plans for Mendelssohn to cut out of the pace like he did in the Travers. But O’Brien said: “I think we’re very easy whatever happens. Our horse doesn’t mind leading and he won’t mind the other way.”

Moore will return for half a dozen rides at Naas on Sunday by which time Donnacha O’Brien will hope to have added to his 2018 Group One haul.

The 20-year-old has won three classics in a momentous year that also has him all but assured of the jockeys crown for the first time.

He has been on board Ten Sovereigns for both his starts to date at the Curragh, winning on his debut by seven lengths before following up in style in the Round Tower Stakes.

None of the Ballydoyle juvenile team has struck at Group One level yet this year although it will be a significant reverse if Ten Sovereigns at least can’t reverse that trend.

It could have altered by the time he runs anyway with the Lowther winner Fairyland appearing to be the O’Brien No. 1 for the Cheveley Park Stakes.

The sentimental Irish favourite for this however will be Sheila Lavery’s Moyglare runner up Lady Kaya and her jockey Robbie Colgan.

Rather than a Moore-style glut of Group One options, much of Colgan’s career lot up to this season consisted of riding in jump races. Should he strike at the top level of the flat it will be a hugely popular win and difficult to put a value on.