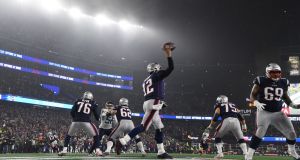 New England Patriots quarterback Tom Brady throws an interception to the Tennessee Titans for a touchdown in the final seconds of their AFC wildcard playoff game at Gillette Stadium in Foxborough, Massachusetts. Photograph: John Cetrino/EPA

Following what could be his last game with the New England Patriots, quarterback Tom Brady said on Saturday night it’s “unlikely” he’ll retire.

“I would say it’s pretty unlikely,” Brady told reporters after his team fell 13-20 to the Tennessee Titans in the AFC wildcard game in Foxborough. “Hopefully unlikely.”

The 42-year-old Brady, who is set to become a free agent for the first time in his career, otherwise declined to speculate about his future.

When asked about the possibility of bringing back Brady next season, head coach Bill Belichick replied, “Right now, we just finished the game, so we’re focused on this game right now, okay.”

If it was indeed Brady’s last game with the Patriots, his last pass was an interception for a touchdown. With New England backed up to the one-yard line with 15 seconds left and down 13-14, Brady’s pass was tipped and intercepted and run back nine yards for a score by Logan Ryan.

Asked what he thought about the play, Brady replied, “That’s what happens when you throw the ball. I wish it’d have been a 99-yard touchdown, but it wasn’t.”

Brady finished 20 of 37 for 209 yards in defeat. The crowd greeted him with a loud roar when he first came out of the tunnel before the game, and many brought signs asking him to stay with the Patriots.

The 20-year veteran finished the regular season having completed 60.8 percent of his passes for 4,057 yards, 24 touchdowns and eight interceptions. His completion percentage was his lowest mark since 2004, and his yards per attempt average (6.6) was his lowest since 2002. He missed out on a Pro Bowl selection for the first time since 2008, when he tore his ACL in the first week of the season.

1 Ken Early: Why international football is fading into obscurity
2 Colin Kaepernick’s exile is too fresh for NFL to speak out on US protests
3 ‘A radical departure’: Who are CVC and what are their plans for rugby?
4 Marcus Rashford says society ‘more divided than ever’ in anti-racism message
5 IRFU plan gives club rugby hope of return to action this year
Real news has value SUBSCRIBE