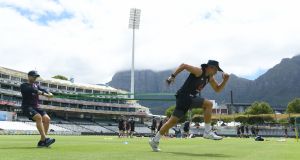 England opening batsman Rory Burns during training at Newlands in Cape Town before he injured an ankle in a game of football. Photograph: Stu Forster/Getty Images

Ben Stokes revealed this week that England’s players are calling this trip to South Africa “the cursed tour” and yet more evidence that is indeed the case presented itself on Thursday when the opener Rory Burns was struck down with an ankle injury during the team’s customary pre-training game of football on the eve of the second Test at Newlands.

Burns landed awkwardly on his left ankle in the follow-through from a shot with which he scored despite the close attention of Joe Root. Yet not even VAR could apportion any blame to England’s captain for the unfortunate luck that led to Burns – his team’s top scorer during their opening Test defeat at Centurion – rolling his ankle before being treated by the team doctor Anita Biswas and helped off the field.

Burns was one of the few players not struck down with a sickness bug that affected 17 members of the England touring party during their time at Centurion. Whether he plays in the second Test starting on Friday depends on the results of a scan and how his ankle reacts overnight. But the signs do not look good given how much pain he appeared in shortly after sustaining the injury and the fact he was unable to walk off the field to the changing-room at Newlands.

That means Zak Crawley, the 21-year-old opener who made his Test debut against New Zealand in Hamilton four-and-a-half weeks ago, is on standby to partner Dominic Sibley at the top of the order.

Yet if things were not bad enough for England, it had already emerged before Burns’s stumble that Jofra Archer is all but ruled out of the second Test with the right elbow problem that flared up during training on New Year’s Day.

Archer, England’s top wicket-taker during the first Test, did not train on the eve of the match and England are awaiting the results of a scan before officially ruling out the fast bowler. Whether the 24-year-old will play again in this four-match series is also dependent on those results.

Root indicated a player who has played 22 games of international cricket since making his England debut last May would not be risked. “It is obviously quite disappointing to see Jofra pull up like that,” the captain said. “I think it’s a recurring injury, something that he has had before. He did pull up very sore. He had a little trundle after our fielding practice and seemed to be in a little bit of pain.

“That is something you want to manage in a young talent like Jofra, making sure that we don’t blow him out for six months and make sure we get the most out of him for as long as we can. It’s important to weigh everything up, see what the scan says, how he pulls up today and go from there.”

Root confirmed that both the fast bowler Mark Wood and the Somerset spinner Jack Leach are not fit enough to be considered for the second Test. With a dry pitch at Newlands, it appears certain Dom Bess, another slow bowler from Somerset who played two Tests against Pakistan in the summer of 2018, will come into the side for Archer.

Ollie Pope, the Surrey batsman who missed the first Test after being struck down with the virus that swept through the England camp, is also expected to come back into the XI for Jonny Bairstow.

As for talk of the “cursed” tour – to which his vice-captain Stokes referred in his newspaper column on Monday – Root, speaking before Burns was injured, said: “It’s been frustrating throughout, but these things happen in sport. You’ve got to manage them as best we can, and we are trying to make sure that if anyone does pick up illness or injury then they are fit and ready to go as soon as possible.” – Guardian