The sporting decade that was: Taylor keeps the faith and writes her own history 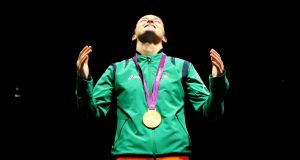 In the summer of 2012 Katie Taylor seemed to find her rightful place. Finally just that. It was an Olympic competition she had helped to create for women, a sport she had dominated for almost a decade and with a narrative and score penned by her, the whole boxing world was aware that what Taylor was trying to do was to write her own history.

It was Taylor who the authorities had invited to the men’s World Championships in Chicago 2007 to box in an exhibition match so that the Olympic world could appreciate the level of those at the top of their sport. While 2008 and Beijing was to be a resounding disappointment when boxing was not included in the Olympic programme, 2012 was to be her defining year.

In that sense the London Olympic Games and Taylor’s three fights to the gold medal at the EXcel Arena in the city’s regenerated docklands were the final chapters in that history. And in beating Russian southpaw Sofya Ochigava, the win took her out of the narrow confines of her sport and into the hearts and minds of those who had never before watched a boxing event. A largely cynical world had bought old-fashioned notions of faith, modesty, grace and athleticism.

The Olympic gold medal had been preceded by four world titles and five European gold medals and Taylor had swept into the English capital unbeaten in a major championship since her first European win as a teenager in Norway’s Tonsberg back in in 2005.

But none of those wins had the resonance of an Olympic Games in London. It was her Oscar after a litany of awards in far flung places such as Jeju, Barbados, Qinhuangdao, Warsaw, New Delhi and Ningbo to which she would disappear, do her job largely unseen, then return laden down with gold medals.

But London was visual and live in Irish sitting rooms. First there was Britain’s Natasha Jonas in a big hitting, loud, percussive fight. Then came a more comfortable win over Mavzuna Chorieva from Tajikistan before the cat and mouse counter punching of Ochigava drew the first women’s Olympic boxing event to a tactical climax.

Most people had no idea who had won the bout as Taylor tried to pick off her opponent with the wily Ochigava patiently circling the ring. When the final bell rang the last images were her hand going up, her knees dropping to the canvas and also a prayer. It was Taylor’s hallelujah moment.