The sporting decade that was: Athletes, first and foremost, without an asterisk

The 2016 Paralympics threw up 4,350 unique stories, with many written by Irish athletes 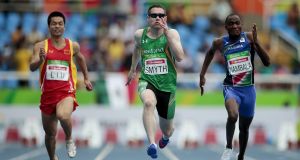 Jason Smyth: “I grew up in Ireland, nothing special, no better privileges than anyone else.” Photograph: Alexandre Loureiro/Getty Images

The Paralympics champion the indomitability of the human spirit set against a backdrop of sporting endeavour. The 2016 version in Rio de Janeiro offered 4,350 stories with life’s genetic lottery at the core, tales subdivided by illness or blunt force trauma but retaining a central theme - the desire to compete at an optimum level, irrespective of the outcome.

It’s easy to both marvel at the accomplishments while trying to figure out what motivates someone with no arms and one leg to take up swimming, watching them grip a towel with their teeth as they seek purchase on the side of the swimming pool wall awaiting the start of a race. Why would someone with five per cent vision choose to be blindfolded and take up the long jump?

While others wonder, they get on with their lives, staring down significant challenges in their daily as well as sporting regimen. Imperfect physiology aside they share the DNA of their able bodied counterparts, commitment, dedication and sacrifice in pursuit of a sporting goal. Their wish is to be addressed as athletes, first and foremost, without an asterisk. They engage fully and openly something that is hugely refreshing in the largely anodyne and sterilised world of the soundbite.

To be able to enjoy the Paralympics firsthand was an unforgettable experience, the grace and humour of the participants woven into the athletic narrative; wincing at the filling loosening collisions of wheelchair rugby to the technique and artistry of wheelchair tennis were a couple of personal highlights outside more parochial interests.

From an Irish perspective there was plenty to celebrate from the ‘Fastest Paralympian on the Planet,’ Jason Smyth winning a fifth gold medal in his third Paralympics to Noelle Lenihan’s bronze in the discus and all points in between; 11 medals in total.

Smyth’s words in the aftermath of his victory outline both his charm as a person but also resonate in pure sporting parlance. “I grew up in Ireland, nothing special, no better privileges than anyone else; I have just worked hard, committed to what I am doing, had good people supporting me and guiding me, had the success (that ensued) and hopefully that can encourage others.” As a role model in Irish sport he has few peers.