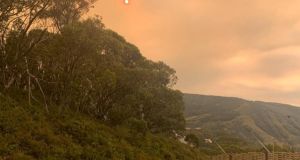 Three leading Irish athletes have been forced to abandon their planned training camp around the Australian mountain resort at Falls Creek, in north-eastern Victoria, due to the increasing threat and proximity of bushfires.

Seán Tobin, Paul Robinson and Michelle Finn all travelled out from Dublin to Melbourne over the new year, and were set to arrive earlier on Thursday at Falls Creek, about a five-hour drive from the city, only to be turned back by police and fire officers at the foot of the mountain.

Sonia O’Sullivan is already at the Falls Creek resort, a sort of annual excursion for her and husband Nic Bideau, along with members of the Melbourne Track Club, many of whom Bideau coaches. O’Sullivan has been using the venue as a New Year training camp since 1998.

Set within the Alpine National Park, it’s also where many of Australia’s elite athletes from several sports go to help begin another year on a positive note. The entire mountain has now been given an evacuation order, and everyone must be gone by Friday.

Many of those at Falls Creek already departed overnight once the evacuation order was put out, and although the skies were a little clearer on Thursday, the fires can be seen on most of the surrounding mountains.

Tobin, Robinson and Finn will now have to wait several days or more before attempting to return to Falls Creek, once the evacuation order is lifted. All three were planning on spending several weeks at the high-altitude resort to help kick-start their efforts to chase Olympic qualification and also build towards the European Athletics Championships in Paris in August.

Tobin was Ireland’s best senior men’s finisher at last month’s European Cross-Country in Lisbon, placing 18th, and Finn is looking to qualify for Tokyo in the 3,000m steeplechase, having also qualified for Rio in 2016. Robinson previously finished fourth in the European Championship 1,500m in 2014.

Earlier in the day, Victoria premier Daniel Andrews declared a state of disaster for six local government areas and the Alpine resorts, after considering advice from the minister for police and emergency services and the emergency management commissioner.

“Conditions are expected to deteriorate from tomorrow and the Government’s priority is the safety of Victorians,” read a statement: This is the first time the Victorian government has used these powers since they were included in the emergency management act 1986 following the devastating Victorian bushfires in 2009.

“Dealing with the immediate aftermath of the fires while many fires continue to burn across the state is a significant challenge that involves all levels of government. The government has already established a bushfire response and recovery taskforce to support communities and help them rebuild from the devastating fires still burning in the east of the state.”