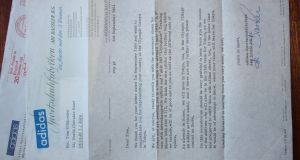 The letter of September 3rd, 1964, about six weeks before the start of the Tokyo Olympics

We were rooting through an old trunk in the kitchen over Christmas and found a letter from Adi Dassler buried under some newspaper clippings. There was always a family rumour that the first Irish athlete from any sport to get a running shoe contract was our dad – and perhaps the first to break it – and here it seemed was evidence to back it up.

The letter is dated September 3rd, about six weeks before the start of Tokyo Olympics – the 1964 edition, obviously – hand-typed under the letterhead “adidas, Sportschuhfabriken ADI DASSLER K.G. die Marke mit den 3 Riemen” and sent direct from Herzogenaurach in the old West Germany to where he lived at the time at 22 North Circular Road, Dublin 7.

Which translates as “adidas, Sports shoe factories, ADI DASSLER K.G. the brand with the three stripes” and evidence too of the original arms race in the running shoe business – long before the Nike Vaporfly versus the rest of the world.

Because at the other end of Herzogenaurach at the time was the factory of rival brand Puma, set up by the older Dassler brother Rudolf following their bitter split after the second World War.

By 1964 things were changing fast in how – or rather why – an athlete wore a particular brand of shoe. Up until then most were quietly reluctant, and rightly so, to accept free shoes or gear lest it infringe on their amateur status, with potentially career-ending consequences. Only now the once close Dassler brothers were changing the game by actively recruiting leading athletes from around the world, including Ireland, responding to most legitimate requests with the offer of free shoes and gear, and deftly loosening the rules in the process.

We thank you for your letter dated 1st September 1964 and wish to congratulate you for representing your country at the Olympic Games in Tokyo.

We are, of course, ready to outfit you with the necessary shoes for Tokyo and are sending you in a few days via airmail 1 pair 141A “9.9” now with interchangeable spikes and 1 pair 261 “Olympiade” Training Shoes, both size 9½. We think the new Adidas skai leather bag, which we include, will be of good use to you as well as the different set of spikes.

As already in Rome, we will have in Tokyo too in the Olympic Village an Adidas service stand, and if there are any further needs please contact us there.

On this occasion we should be very grateful to hear from you the names of the athletes who will also be on the Irish team for Tokyo, as we are prepared to outfit them with Adidas shoes too. At the same it would be of advantage to know when your team will leave for Tokyo.

Looking forward to hearing from you very soon, we are,

(and signed here by the man himself)

By 1964 the Adidas brand had also stolen a major lead over Puma, and Dassler was keen to keep it that way. Who knows what might have happened had they stuck together: Adi, the younger brother, first began the business of stitching together running shoes in 1920 in their mother’s laundry room in Herzogenaurach, Rudolf joining him in 1924, the brand originally known as Gebrüder Dassler Schuhfabrik – the Dassler Brothers Shoe Factory – or Geda for short.

At the 1936 Olympics in Berlin they convinced Jesse Owens – by legal means, presumably – to wear their original Geda track spikes, and the Dassler reputation soared.

Yet in 1947, when rebuilding the brand again after the second World War, the brothers split for still largely unknown reasons (jealously, in part), Adi naming his new brand by combining his first and last name, Rudolf settling on Puma after he initially named his new brand Ruda.

Plenty of Irish athletes had worn the Adidas brand before 1964, none more successfully than Ronnie Delany, the difference being he made certain to purchase them himself, especially before his 1956 Olympic 1,500m gold medal run in Melbourne. Delany never accepted free shoes from Adidas or anyone else, and I rang him up just to make sure.

“Definitely not,” he confirmed. “In 1956 you could not ‘take’ any running shoes or else you could be considered quasi-professional. Now I may have been the first Irish athlete to be offered shoes, but I never accepted them.

“In fact some years after Melbourne, Horst Dassler, who was Adi’s son, once spoke about giving me the spikes to compete in Melbourne, and I had to politely correct him, saying ‘Mr Dassler, you do not supply my shoes, and I remember the exact street and shop on Prince’s Street in Sydney where I bought them’.

“I also recall a headline in The Irish Press after I ran my first sub-four minute mile in Compton in California in 1956, which read ‘Delany spends last $15 on track spikes’. If you’d taken shoes from anyone back then you would have infringed on your amateur status.”

I was rooting around again over New Year’s and found another small pile of original Adidas letters, all signed by the man himself, including one dated May 12th, 1967, again sent direct from Herzogenaurach to where dad lived at the time at 13 Churchtown House Estate, Dublin 14.

We thank you for your letter dated 3rd May 1967 and are pleased to note that you want to wear Adidas sportshoes in all future meetings. We were disappointed last year to see you in Puma just after we had given you some Adidas shoes and swore then not to give you any more shoes.

Wishing you a successful season in Adidas, we remain,

This may not be the first official breach of an Adidas contract, but as in any arms race some small battles may be lost before the war is won.