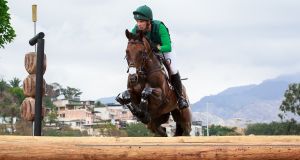 The Devon-based Tipperary native had the final joker fence down with the 14-year-old Anglo European mare but those three penalties left him on the winning time of 91.37, ahead of Britain’s Paul Sims who was clear but slower with the nine-year-old Irish Sport Horse gelding, Second City (91.43).

Earlier in the month, McCarthy and Rosemaber Lancuest had placed third in a similar competition in Geneva won by Co Kildare-based Cathal Daniels riding Alcatraz but the positions were reversed on this occasion when Daniels and Sarah Hughes’s 14-year-old Dutch Warmblood gelding finished in 92.98. Co Down’s Joseph Murphy, who, like McCarthy and Daniels, lowered the joker fence, slotted into fourth with the 18-year-old ISH gelding, Sportsfield Othello (95.33).

McCarthy, team and individual silver medal-winner at last year’s World Equestrian Games in North Carolina, will be in Ireland next month as guest speakers at the annual general meeting of the Northern Region of Eventing Ireland.

Disappointed not to have added to his win in Switzerland, and earlier at Stuttgart where McCarthy finished second, Daniels did have the pleasure over the weekend of seeing his best-known mount, Rioghan Rua, being voted EquiRatings horse of the year in a knock-out Facebook poll.

Daniels partnered the ISH mare on the WEG silver medal-winning team last September and this year won individual bronze at the European eventing championships in Luhmühlen, Germany with Mags Kinsella’s home-bred 12-year-old by Jack Of Diamonds. In the final vote of the EquiRatings competition, Rioghan Rua ended up on 51 per cent with 49 per cent of those who voted favouring SAP Hale Bob on which the host nation’s Ingrid Klimke won team and individual gold at Luhmühlen.

The final round of the 2019 FEI Jumping Ponies Trophy takes place in Mechelen on Monday with six Irish riders due to line-out in the 14-strong field.

Last year’s final was won by Power who followed up on Seamus Hughes Kennedy’s success in the inaugural running of the competition in 2017.