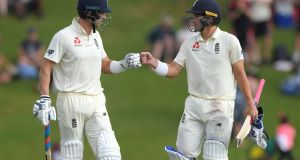 England batsmen Joe Denly and Rory Burns touch gloves as play finishes for the day with both batsmen still at the crease after day three of the first Test at SuperSport Park in Pretoria. Photograph: Stu Forster/Getty Images

England are hoping to sign off an unforgettable 2019 with another improbable chase after Rory Burns gave them a promising start pursuing a record 376 against South Africa.

Presented with a target that even dwarfed the 359 Ben Stokes hauled in during his Ashes miracle at Headingley in August, Burns’s focused 77 not out steered England to 121 for one at stumps on day three of the first Test.

The tourists looked out on their feet after two dreadful sessions in which they allowed South Africa to pile on 200 runs for their last six wickets, with illness once again causing major disruption.

Captain Joe Root and wicketkeeper Jos Buttler were both laid low by the sickness bug which has now hit 10 squad members and four backroom staff, and their readiness to perform to their best in what promises to be an intriguing fourth day must be uncertain.

The evening session at SuperSport Park saw England progress methodically as Burns, dropped by Rassie van der Dussen on 20, forced doubt into the minds of a South African team who nevertheless have 254 runs to play with when the battle resumes.

There is no escaping the fact that England lost control in allowing South Africa to reach 272 all out but their highest opening stand of the year, 92 between Burns and Dom Sibley, went a long way to papering over the cracks.

Play resumed with South Africa 175 ahead on 72 for four – clearly ahead of the game but vulnerable to an early surge.

At the crease were a debutant, in Van der Dussen, and nightwatchman Anrich Nortje, the kind of pairing that might just be exposed by clear-headed cricket from the fielding side.

That was not quite what England delivered, with too many short balls and too little examination of the channel around off stump. For their part the South African duo ran with purpose, pushing their luck with quick singles and buzzing with intent.

Van der Dussen kicked things along with three fours in one Stuart Broad over – a thick edge past slip and two booming drives – and soon there was a set of five wides and an Archer bouncer that ballooned for four byes.

England waited an hour-and-a-half to celebrate their first breakthrough, Van der Dussen lbw to Archer for 51 and struck twice more before lunch, Nortje’s defiant knock of 40 ending with a flick to short-leg off Archer and Stokes taking care of Dwaine Pretorius.

But England could not cool down the run-rate, Quinton de Kock launching an attacking flurry including two flamboyantly pulled sixes off Archer as well as another maximum off the top edge.

There was a ragged quality to England’s play throughout the morning, not helped by Buttler’s absence from the field and Root’s going off with similar symptoms. That left vice-captain Stokes in charge for a spell but his fiery nature was apparent during an animated conversation with Broad during drinks.

The afternoon brought the final three wickets for the addition of another 75 runs – one apiece for Stokes and Sam Curran and a fifth for the expensive Archer, who also landed several blows to the hands and bodies of the batsmen.

That was the last thing Burns and Sibley will have wanted to see as they pondered another examination by Kagiso Rabada and Vernon Philander. Round one of that battle ended in a knockout blow for the bowlers but this time it was a points victory for the batsmen.

Burns was given out lbw to Rabada’s sixth ball of the innings but successfully called for DRS, allowing England to reach 24 for nought from an awkward pre-tea spell. Burns should have gone for 20, nicking Philander early in the evening session, but breathed a sigh of relief when Van der Dussen parried the ball to the ropes.

He tightened up after that, trying to leave or play inside the line then forcing anything too straight to the boundary. Sibley restricted himself even more emphatically, contributing just 10 in a welcome 50 stand.

South Africa were beginning to look short on ideas on a pitch that was settling into its flattest phase of the match and could not dry up Burns’s regular punches through the infield. Sibley stuck around for 90 balls and chipped 29 off the target before a soft end, pushing a docile delivery straight back to spinner Keshav Maharaj.

Burns held firm, rattled once by Rabada’s pace and nicking Maharaj past slip in the final over, with Joe Denly his overnight partner.