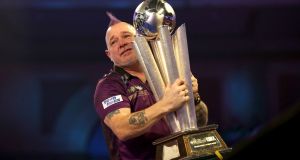 At the age of 49, Peter Wright has scaled the very highest peak. That his victory in the final of the Professional Darts Corporation world championship was one of the most stunning upsets this sport has ever seen is no slight on his own talents, and more a tribute to his beaten opponent: the great Michael van Gerwen.

Against one of the most feared players in history, and against his own wretched history in finals, Wright played with calmness and courage, maintaining a remarkable accuracy on his doubles, and winning by a margin of seven sets to three.

As he slotted in the final double-10 to become the oldest first-time world champion in PDC history, Wright’s implacable favßade finally broke. The tears began to flow. He went for a big swing of the fist, but was almost too exhausted to complete it. Over the last few weeks, he has cultivated an air of disinterested nonchalance that those who know him will tell you was merely a suit of armour: a firewall to prevent him from confronting just how much it all meant. He will be 50 in March, almost gave up the sport in 2014 due to a lack of success, and in accumulating a record of 10 defeats in 11 major finals, was beginning to confront the idea that he might never reach the top rung of the sport. That is a debate that can now firmly be put to bed.

Meanwhile, as the pyrotechnics and the crowd exploded, van Gerwen quietly cleared away his darts. This had not been a vintage tournament for him, even before its conclusion: rarely had he located his scintillating best, and yet there remained a suspicion that he was keeping something in reserve for the big occasion. And while an average of 103 was perfectly passable, what was most shocking of all was how fallible he seemed: his throw broken 10 times in all. He may claim not to care that for all his dominance of the sport, he has never successfully defended the world title. But until he does, his grip over his era will never quite be total.

Wright, for his part, had shrugged off a horrific head-to-head record against van Gerwen, insisting that things would be different this time. He had almost failed to make it past the first hurdle, scraping past Noel Malicdem of the Philippines in round two. Perhaps that engendered a certain blitheness in him, or as former world champion John Part so succinctly put it, perhaps he had reached a point where ‚Äúyou’re so scarred you’re not afraid of getting cut any more‚Äù.

Certainly that was the impression he gave off in storming to the opening couple of sets. Van Gerwen had begun the final with a 34, and things did not appreciably improve from there. Strange darts were emerging from his broad, meaty hands: darts that were dropping an inch below the 60, numerous leaked ones and sevens. He left the stage 2-0 down, perplexed and running a finger across his eyebrows, the only remaining hair on his head.

The surge came in set three. And when van Gerwen is in full flow there can be few greater sights in the sport: a flurry of trebles pitter-pattering up and down the board almost too quick for the eye to follow. There was a stunning 11-dart leg, part of a set in which he averaged 122. There was no let-up from Wright, meanwhile: he averaged 107 in set four, and still lost it.

But now van Gerwen’s sturdy doubling began to desert him. Seven in a row went begging in set five, and Wright cruised into a 4-2 lead courtesy of consecutive 12- aqnd 11-dart legs. Van Gerwen pulled a set back to trail 4-3, and continued to create chances. Yet while an on-song van Gerwen would have seized them lustfully, here he missed darts to win the eighth and ninth sets. All of a sudden, Wright was 6-3 and on the brink of history.

The final leg was, in many ways, a microcosm of the match: Wright approaching his task with the same surgical ruthlessness with which he had approached the entire match. Scores of 140, 123, 81 and 137 left him three darts at double-10 for the world title. The first two went begging. The third, characteristically, found its target. Across the final as a whole, Wright’s checkout percentage was a scarcely believable 53 per cent.

And so darts has its latest world champion: a testament to hard work and experience, perhaps, but also the ability of this fast-growing sport to create new heroes at a whim. The emergence of future stars of the sport like Luke Humphries, Darius Labanauskas and Fallon Sherrock seemed somehow emblematic of a sport that is remaking itself before our eyes, and now, remarkably, appears to have done so again. – Guardian