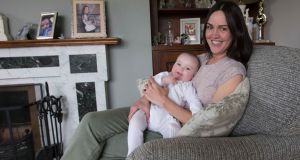 Baby Ellis grins, gurgles and mewls like every other healthy infant but has noticeably long and busy legs for a five month-old.

Not surprising given that both of his parents were good enough runners to get track scholarships in America where his mum was US colleges’ 5000m champion in 2006 and the European Indoor 3000m bronze medallist in 2009.

When Ellis is older he’ll probably quiz her about the clatter of medals hanging off a wall sconce above the fire in Granny’s house. But he will probably never understand just what a warrior she is.

Mary Cullen eyeballed the doctor and asked him straight: “Are you considering cancer?”

When he said ‘yes’ she revealed that she was eight weeks into her first pregnancy. She was 36 and hadn’t even told her own mother yet.

For those living the wholesome lifestyle of an elite athlete, serious illness is a cruel irony. When it endangers a second life also your world spins at warp speed.

Yet being a world-class athlete was the canary in Mary Cullen’s mine and has also been key to surviving the toughest year of her life.

In September 2018, on holidays in Portugal, she noticed her hearing was muffled, “like a fullness in one ear”. When it didn’t respond to drops and antibiotics she persisted.

The medics in Sligo Hospital found a lump in her nose and hoped it was adenoid-related but it wasn’t. It was the tip of an iceberg. It was in her nasopharyngeal region, a rare form of head and neck cancer.

She couldn’t get the necessary PET and CT scans to establish how much it had spread because any radiation could damage her baby. Urgent surgery was still recommended, even though there was a risk of miscarriage if she bled too much.

The tumour was removed, through her nose, on December 15 last and the surgeon also slit her throat crossways to remove almost 90 lymph nodes from her head and neck.

The good news was that only one node was cancerous. The bad news was that it was right beside her brain stem. But at that point she had a different priority.

“With running you’re always considering yourself, you’re nearly always the ‘selfish runner’, but once they mentioned ‘miscarriage’ my mind just shifted to the baby, to get as healthy a gestation for him as possible and then I’d figure out my own stuff”.

She postponed further treatment and got him to 34 weeks. Ellis Frankie Smyth weighed five pounds at birth in late May, spent two weeks in intensive care but survived beautifully.

His mum’s race, however, was only half-run and got even steeper.

“There’s a hospital in Germany, in Essen, that does proton radiation. We have photon here but proton, as I understand it, is more precise and does less damage to the healthy tissues. Because my cancer was beside the brain stem they recommended Essen.”

Cancer treatment is awful but getting it abroad, with a new-born, trebled the challenge. They booked a flat locally and, in late July, herself and Mark, her mum and the baby moved over and her three sisters took turns travelling to help over the seven weeks.

She was fitted for and locked down in a face-mask for the radiation, “on your back, unable to move, which is a bit scary”.

She got chemo in another hospital and the side-effects of her treatments were “horrendous. My neck just looked like I had bad sunburn but I was burnt inside. My oesophagus was badly inflamed and I had terrible mouth sores.

“It got to the point where I’d just let all the saliva out into a spit cup when I was sleeping because it was so painful to swallow.”

Running has been her succour, in good times and bad, so she continued to exercise during most of it.

“Yeah, four or five miles a-day initially but two weeks in I got a very sore swallow and, at week four, the running stopped but I was still going for walks.”

The fifth session of chemo finally floored her, leading her to violently vomit up the supplement drinks they were trying to use to nourish her.

“The last two and a half weeks were definitely a struggle,” she admits.

Relieved to get home she powered through but ended up in Sligo General, for pain relief, for three nights.

Yet Cullen reckons her physical resilience as an athlete was her greatest ally.

“I got six of my chemotherapy treatments in 21 days and was told most people getting that particular treatment would only get three by then.

“In running, when you’re preparing for a race it’s like tunnel-vision. You know what you have to do and you do it in stages and it was a bit like that.

“I didn’t allow myself to go to a scared place. I just took it day to day, got the treatment and kept thinking about the end point.

“Being an athlete helped me massively that way and also because there was such support,” she reflects.

“I got so many messages from runners and not just in Ireland. That gave me such a lift, like I wasn’t doing it alone. Pierce O’Callaghan (former Irish race walker), who works for the IAAF, told my story to Svein Arne Hansen, the president of European Athletics and he shared it on Twitter.

“This running community, even though we’re spread all over the world, they still have your back! That’s such a lovely feeling.”

Her return from Essen actually coincided with the World T&F Championships in Doha, where Molly Huddle, the USA record holder over 10,000m, finish ninth in the 10k final, almost a minute behind Sifan Hassan’s remarkable time of 30:17.

From Cullen’s time in Providence, both in college and as a pro, Huddle is one of her ‘girl crew’, a tight-knit international training gang of stellar distance runners, including Cullen’s college teammates Roisín McGettigan and Kiwi Kim Smith who have had race results retroactively improved because dopers got caught. McGettigan was bumped up to a European indoor 1500m bronze.

“I still look at Molly and Kim, amazing athletes who trained so hard but never medalled at major champs. Doha was the first World Championships ever that I just couldn’t engage with,” Cullen stresses and she’s not just talking about her own health.

She looks well. Her specific chemo treatment (Cisplatin) only thinned her hair and a deft surgeon managed to hide her scar in the natural crease of her neck.

She’s still thin – dropped to 48 kilos (7st 8) at one point, lower even than her lightest racing weight (51kg) – because she is still recovering her swallow and taste.

But the worst, she hopes, is over and if telling her story can help others, especially to raise awareness of rare cancers like hers, she is happy to share it.

Right now Cullen has the most important finish line in her life to cross.

She gets the results of her treatment on December 13th and has already booked afternoon tea in a posh Dublin hotel next day.

“It’ll be almost a year exactly since my surgery and I want to treat my mum and sisters for all they’ve done. People might be like ‘oh the cost of it!’ but I definitely don’t sweat the smaller stuff any more,” she smiles.

“As an athlete you’re so in tune with your body, hyper-tuned really. I think I was lucky to spot it and keep chasing it up.

“Through it all I was just thinking ‘have the baby, just let the baby be healthy’ and then it was ‘get the treatment, get rid of the tumour’. I don’t think I’ve sat still yet and thought about what’s just happened.”

She’s back running her local four-mile loop in Drumcliffe again, breathing in deeply a gloriously scenic homeland that she now runs, and sees, differently.

“Before I’d have been head down pacing, fixated on my watch. Now I look around me. I see Ben Bulben and Lissadell and definitely appreciate my surroundings way more.”

Contrasting reactions from Wozniacki and Williams to Melbourne exits 17:22
Matt Williams: Expect the unexpected in rugby’s greatest tournament 16:00
NFL Division One: Malachy Clerkin’s team-by-team guide 16:00
Kellie Harrington one fight away from gold in Bulgaria 15:52
Eddie Pepperell sets the halfway pace in Dubai Desert Classic 15:22
Here is your handy guide to sport on television this week