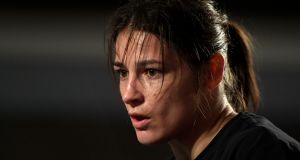 Katie Taylor: “I have put in hundreds of rounds of sparring these last few years and I am prepared for this kind of challenge.” Photograph: George Wood/Getty Images)

At her press conference earlier this week Katie Taylor said she had her longest training camp so far for this, her 14th professional fight.

What she didn’t say was whether that was because of her narrow win over Belgium’s Delfine Persoon last time out which saw her unite all four lightweight divisions, or because of her move up to 140 lbs for Saturday’s opponent in the Manchester Arena, Christina Linardatou.

Either way, the Greece-domiciled Dominican Republic boxer can read what she likes into it. Taylor was taken as close as she has been to defeat by Persoon, having almost punched herself out in the closing rounds. Both the Irish champion and the current super lightweight champion Linardatou will take their own intelligence from that.

It has been Taylor’s prerogative for her entire amateur career and now for her three-year professional run to take her skill set to places they have never been. Jumping up a weight for the World Boxing Organisation World Female Super Light Title to become a two division world champion seems almost mundanely appropriate.

The threat this week comes from a smaller, pugnacious puncher who has a big right hand and who, like Taylor, is not a natural super lightweight. Both boxers are reaching for the heavier limit, which was borne out by the weigh-in.

The taller Taylor, who holds the four belts at 135 pounds, weighed in a career-heavy 139.6 lbs, just over a pound more than the 140lb belt holder, Linardatou, who tipped the scales at 138.5lbs.

But Linardatou has the title and Taylor wants it to add to the belt collection but also to make herself an even more lucrative prospect in 2020.

Her loquacious promoter Eddie Hearn has been promising a first female million dollar purse next year for her to face Amanda Serrano, Cecilia Braekhus or Persoon for a second time, as motivation to get this one over the line.

Through her connections with Sky and pay-for-view it is realistic but Taylor must keep knocking down opponents. The bookies have her as a hot prospect and 1-3 to win by a decision or technical decision, her opponent 25-1 to do the same.

“I have the chance to become a two-weight World Champion and I am very prepared for this fight,” she said on Friday. “I have had a long training camp, the longest one I have had for a professional fight, so I am feeling strong. These are the kind of challenges that I relish and I’m expecting a very tough fight. She is the champion and I am the challenger but I am ready.”

It’s easy to see why the 31-year-old who holds the belt is not the favourite to retain it. While an aggressive, come forward Linardatou destroyed Kandi Wyatt in March of this year, landing a series of heavy back hand rights before the referee waved her away, it was only her third professional fight since November 2016 and a few months after she lost to Persoon for the WBC lightweight title, now in the possession of Taylor.

There’s no doubt she has dangerous punching power in that right hand but Taylor’s speed and tactical nous, despite the struggle with Persoon, should be able to keep her out of distance. Taylor has also been faster than all of her opponents, if occasionally too brave for her own good.

Going to war with Linardatou will undoubtedly cross her mind at some point on Saturday night and that would be exactly what her opponent would want. Toe to toe has, intermittently, been Katie’s Achilles’ heel although with 14 wins from 14 and four belts, it might be getting picky to suggest that.

“I am in there with bigger and stronger girls now,” she said. “But I have put in hundreds of rounds of sparring these last few years and I am prepared for this kind of challenge.

“I have put in a lot of strength and conditioning work and I can’t wait to get in there now. There is a lot of big fights out there for me. But I am only focused on Christina at the moment. I have to get past her first.”

She knows already that her opponent will bustle her and try to get her to fight a fight she doesn’t want to or need to. Taylor at her imperious best is waspish and quick. She scores and moves and explodes with combinations and variation.

That’s no good for Linardatou. She needs to change the arena of battle, throw junk, rough Taylor up and try to crowd her out and maybe, just maybe, tag Taylor if she slows in the latter rounds.

The super fights are for next year. This one requires care and authority so Taylor can ride into 2020, not with the lingering scent of Persoon and Madison Square Garden but as the best pound for pound female boxer on the planet.