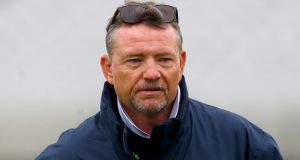 Ireland have qualified for next year’s T20 World Cup in Australia after topping Group B of the qualifying tournament thanks to Jersey’s 14-run victory over Oman in Abu Dhabi on Sunday.

Graham Ford’s side had done all they could do by hammering Nigeria in their final game on Saturday to go top on net run rate from Oman, who knew exactly what was required going into their game against Jersey.

Having posted 141 for seven from their 20 overs, Jersey went on to restrict Oman to 127 for nine with Dominic Blampeid and Elliot Miles both taking three wickets each.

There was still a chance that Ireland could have been overtaken by the teams playing in the final Group B game between hosts the UAE and Canada. It would have needed one side winning by a landslide, but that likelihood disappeared to confirm Ireland as group winners, with the UAE going on to win by 14 runs.

That result means Canada miss out on the playoffs and Hong Kong, a side coached by former Ireland captain Trent Johnson, go through in fourth spot, with the UAE and Oman filling the other spots.

Ireland are joined in next Friday’s semi-finals by Papua New Guinea, who have enjoyed a wonderful tournament, topping Group A ahead of the Netherlands, Namibia and Scotland, who will all get their chance to make it to Australia through the playoffs with four other spots on offer for the remaining six teams.

All six of the qualifiers will join Sri Lanka and Bangladesh in the group stages of next year’s tournament, which runs from October 18th to 23rd. The eight teams will be divided into two groups, with the three teams in Sri Lanka’s Group A playing their games at Kardinia Park in Geelong, southwest of Melbourne, while Group B will be played at the Bellerive Oval in the Tasmanian capital of Hobart.

The top two in each group go on to join the eight top-ranked sides in the Super 12 stage of the tournament, which will be staged at venues in Hobart, Perth, Adelaide, Melbourne, Sydney and Brisbane.