Ian O'Riordan: Are we wrong to be amazed by ageless running wonders? 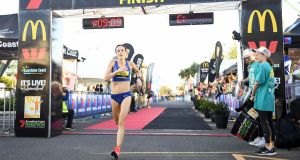 Sinead Diver finishes in second place during the Half Marathon Championships on in Sunshine Coast, Australia in August. Photograph: Albert Perez/Getty Images

I ran into the great Billy Porter on Thursday and as usual he was all worked up about the Dublin Marathon. Not only the decision to declare next year’s race entry a complete lottery, unless you’ve run in one of the last three, which he reckons is going to leave quite a few people disappointed. As well it might.

What had him properly worked up were the number of age group records broken last Sunday, some of which were significantly faster than run before. Such as Gary O’Hanlon’s 2:16.29 to win the men’s over-45 division, good enough for 12th place overall. Wow.

Porter knows what he’s talking about, and not just around the Wicklow running scene he’s been championing for many years. This is the man who once got Daniel Day-Lewis to run the over-45s for his Parnell Athletic Club, convinced he could still knock out the fastest 10km of his life, and has always been adamant that age is no barrier to breaking running records, including his own.

“Now, conditions on Sunday were perfect,” he told me, “but something is definitely happening with those age group records. Men and women. It’s quite incredible.”

It certainly is – and more evidence of that is likely to come in Sunday’s 49th running of the New York Marathon. Among the elite women’s entry is our own Sinead Diver, via Belmullet, Limerick and now Melbourne, who just four months shy of turning 43 is looking to improve again on the 2:24:11 she ran in London last April to finish seventh best woman overall (after leading up to halfway).

“Training has gone really well. I’m definitely in PB shape,” she says, and even on a tough course like New York that looks possible. Still very much the Irish woman running for Australia – as Diver is happy and proud to put it – just over a month ago she clocked an excellent 31:25:49 to finish 14th in the World Championships 10,000m in the searing heat of Doha.

That 2:24:11 in London improved by over a minute the 2:25:19 she ran to win the Melbourne Marathon in October 2018, that already the second fastest ever by an Irish woman, her London time now the third fastest by Australian standards, and virtually certain to see her run at Tokyo Olympics next summer, aged 43. It also moved her ever closer to Catherina McKiernan’s Irish record of 2:22:23, set in Amsterdam in 1999.

Her remarkable running story (and unfortunate “switch” to Australia) has been told before, including on last Friday’s Late Late Show, where Ryan Tubridy, in admitting his amazement at the times she was running at age 42, asked “are we wrong to be?” A fair question, actually.

She is also the featured athlete on the IAAF website this week, under the headline: Age no barrier for Tokyo-bound marathoner Diver. There was no barrier either in the fact she only took up running at age 33, after moving to Melbourne in 2002 with her Limerick-born husband Colin to Melbourne in 2002, now also home to their two sons young Eddie and Dara.

Diver is no great outlier either. Kenya’s Mary Keitany is looking to win her fifth New York Marathon, now aged 37, her most impressive win coming just last year. Nancy Kiprop is now 40 and also run her lifetime best in winning Vienna for a third straight year. One of the top Americans, Roberta Groner, is now 41, a mother of three who only resumed running at age 30, and also just finished sixth in the World Championship marathon in that searing heat of Doha.

Are we wrong to be amazed at that?

I make no apologies whatsoever for being amazed at arguably the most impressive running age barrier to be broken by our own Tommy Hughes in the Frankfurt Marathon last Sunday, and not just for himself but also his son Eoin.

The Derry runner, now aged 59 and already well known in Irish distance running circles for winning the Dublin Marathon back in 1991, and running in the Barcelona Olympic a year later, clocked a properly impressive 2:27:52, the fastest time in marathon running history by any man at age 59. Actually Hughes already held that record with the 2:30:15 he ran in the Rotterdam Marathon in April, bettering the existing record of 2:34:23 by the 59 year-old Yoshihisa Hosaka from Japan, as recognised by the Association of Road Racing Statisticians.

Hughes also secured another world record on Sunday as his 2:27:52, combined with his son’s 2:31:30, made for a combined time of 4:59:22 – the fastest in history by a father and son in the same marathon, two minutes and 50 seconds better than the previous record of 5:02:12, set in 2015 by Britain’s Graham and Ben Green. (An American father and son, Chris and Ken Prior, did clock a combined 4:52:10 in the 1983 Boston Marathon, only that net downhill course doesn’t count for record purposes.

Hughes has broken through some other barriers too. Crippled with injury after the Barcelona Olympics, he openly admits to letting himself go, his life spiralling downward into a haze of depression and alcohol abuse, before an operation in his early 50s eventually put him straight again, after being diagnosed with parathyroidism, which caused his blood calcium to rise and resulted in severe fatigue and weakness.

He now regularly clocks up over 110 miles in marathon training each week, hardly letting a weekend pass without racing as well. He also turns 60 in January, and intends on setting his sights on a whole new range of running records in 2020, from the 10km right up to the marathon, proving yet again that age is no barrier.

Something is definitely happening here all right. Hang on did I hear someone say Vaporfly?