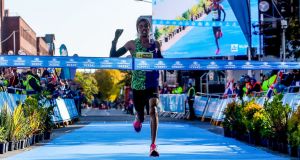 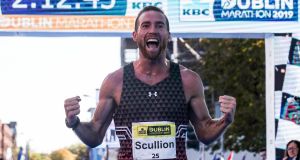 He ran and won but he couldn’t hide from his shadowy past. Othmane El Goumri from Morocco was the first man home in the 2019 Dublin Marathon, just nine months after returning to the sport following a two-year doping ban.

As if to further stretch credulity, El Goumri clocked the fastest marathon ever run in this country, his 2:08:06 almost half a minute quicker than the Dublin course record, set in 2011.

Still, El Goumri couldn’t take all the glory or gloss off the elite race, with Stephen Scullion producing the marathon of his life to take second place outright, his 2:12:01 the fastest time by any Irish man in 17 years, and also putting the Belfast runner well on course to qualifying for next year’s Tokyo Olympics.

Never shy to speak his mind, Scullion promptly declared himself a “winner”, which on several counts he was: as first Irish finisher he earned his first National Marathon title, his 2:12:01 also improving his previous best from the 2:14:34 set in January.

When the room goes dark at night, I go to bed content knowing I’m clean

“Arguably I might have won the thing if he wasn’t here,” Scullion said, asked about the presence of El Goumri. “But look, I won, I feel like a winner inside, that’s a victory for me. I’ve always taken a stance that drug cheats can do whatever they want, I can’t control it. What else can I do. Not stand on the medal podium? Not buy into it?

“I want to enjoy my moment, and in six or nine months time if he gets done for another doping violation, then I’m the champ. If the crowd want to believe I’m the champ, let them say. And when the room goes dark at night, I go to bed content knowing I’m clean.”

Indeed, it was hard to recall a less popular winner in the 40 years of the event, especially as the details trickled down as to exactly how El Goumri made it to the start line in the first place, let alone claim the top prize of €12,000.

“That’s a conversation for the organisers,” added Scullion.

In December 2016, El Goumri was one of six Moroccan athletes handed a two-year ban by the IAAF for irregularities in his Athlete Biological Passport (ABP), a more reliable show of doping. Cleared to run again from January, the 27 year-old El Goumri promptly returned to run 2:08:20 to finish second in the Rabat Marathon in April.

Organisers of the Dublin Marathon only discovered his doping past after his race entry had been submitted by his agent and accepted. By then, said long-serving Dublin Marathon race director Jim Aughney, it was too late.

I don’t know whether we could have taken back his entry. We had a discussion, felt everything was so far advanced, we let it pass

“Yes, we slipped up, and it won’t happen again,” said a clearly disappointed Aughney. “We take all our athletes from accredited agents. Unfortunately, when we found out about our winner today [his doping past], he’d flights booked, we’d accepted his entry.

“This is something we’re going to have to write in to further events. He slipped through the net with regards to us accepting his entry in the first place, but it will be part of the contracts from now on, for any athlete. I don’t know whether we could have taken back his entry. We had a discussion, felt everything was so far advanced, we let it pass. Looking back, that might have been done differently, but there are many other huge positives out there that I would prefer to focus on.”

Four Irish men all made the top 10: Mick Clohisey, defending Irish champion, sixth in a best of 2:13:19; Hugh Armstrong, eighth in his best 2:14:22; and Sean Hehir 10th in 2:16:01. Scullion was certainly ecstatic about his run – coming just three weeks after the 29-year-old finished the World Championships marathon in the crippling heat of Doha, Qatar, in 43rd, in 2:21:31.

“Everything over those last three weeks has been about turning it from sadness to anger to putting it all out here, and I swear to God, after the race in Doha, I wanted to quit, wanted to retire, and cried after, was so disappointed.

Irish people have something the rest of the world doesn’t, this warrior spirit

“But I was so fit, knew I was ready to go well. I’ll get a lot of points today as well, towards Tokyo, so that’s good. And I just love racing, and finishing as well. The hardest part was not getting involved until mile 16. On my left arm I wrote ‘ego’, which means don’t race people too early, then ‘hills’, for obvious reasons, then ‘patience’.

“That was for the first 20 miles, then I wrote ‘animal’, on the right arm, for the last six miles. I got into around fourth place, at mile 22, saw Mick just ahead of me, just kept pounding, pounding. At 24 miles I said ‘f***’ the heart rate, just race. And I loved it. Irish people have something the rest of the world doesn’t, this warrior spirit.”

There was no catching El Goumri, who broke the entire field between mile 17 to 19, averaging 4:42 for his last six miles, sub-2:03 pace; defending champion Asefa Bekele from Ethiopia had no match, ending up fourth in 2:13:02. El Goumri later spoke through his coach and manager Boubker Rizqi, and was asked about that two-year doping ban. “It’s in the past, that’s it,” he said. Could he give any assurances this was a clean performance?

“He said this is behind him. He came here to ‘show who I am’, to run 2:07. He’s been tested, back in Morocco, by the federation, and here to give whatever he could.”

With Patrick Monahan also securing another wheelchair title in 1:39:50, Dublin Marathon number 40 still had plenty to cheer about. Just perhaps not the winner. Not for now anyway.