Meet the Irish women’s hockey squad for the Olympic qualifiers 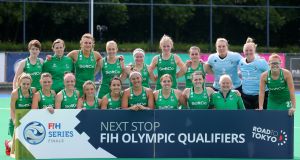 A new face in the squad and the first St Killian’s past pupil to play for Ireland. Now with Dublin’s Loreto, the 21-year-old goalkeeper has 10 caps.

The Catholic Institute 25-year-old is a silver medallist from the 2018 World Cup.  A teacher, she is a graduate from the American collegiate system.

The 29-year-old former Alexandra College player works as a solicitor in Germany and plays hockey with UHC Hamburg. A silver medallist from the 2018 World Cup.

The 25-year-old former camogie player from Ballymoney is another pushing towards 200 caps. A leader she captained the side to the World Cup final.

The full-time coach is sitting on 299 caps and is about to become the most capped female in Irish sport. The 31-year-old record maker plays club hockey with Pegasus.

A hockey and cricket international who holds more than 100 hockey caps. Plays in defence with UCD and incredibly a World Cup veteran at just 21.

Former St Andrew’s pupil and a student in Business and Law, the 27-year-old midfielder plays with Pembroke and is another World Cup silver medal winner.

One of the new faces in the squad who spent some time at UCD. Now with Belfast Harlequins, the 24-year-old made her debut earlier this year. A twin sister to Serena.

The other 24-year-old Barr twin, who also made her debut earlier this year against Chile. Formerly with UK side Beeston and now at Harlequins with her sister.

The 27-year-old trainee accountant plays with Monkstown and has over 200 caps. Earned hardcore stripes scoring in the World Cup shootouts last year.

A Trinity law graduate, the 29-year-old Belfast Harlequins midfield player works in Belfast in employment law. Now in her 11th year as an Irish international.

The former High School pupil is a mechanical engineer and former senior Dublin footballer. Now 31, the Loreto player’s other interests include F1.

A national school teacher in Dublin, the 28-year-old plays her club hockey with Loreto. From a sporting family, her dad Phillip played rugby for Ireland.

The 23-year-old forward has a brother in Leinster rugby and a mum who played badminton for Ireland. She played underage Gaelic football for Dublin.

The 29-year-old solicitor is one of Ireland’s pacy forwards with plenty of attitude and a cool head. Plays club hockey with the Dutch side Pinoke.

Another World Cup veteran at just 22, the defender is one of the 100-plus cap players in the squad. She plays for club side Belfast Harlequins.

The 27-year-old forward played football for Dublin and soccer for Ireland at age grade. A World Cup silver medallist, law is on hold until this Olympic thing is sorted.

Appointed in April when Graham Shaw left to coach New Zealand women, the former Australian Under 21 player was former assistant to New Zealand.