First Dublin Marathon was more about publicity than human endeavour 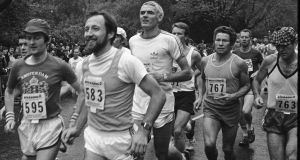 We were somewhere on the ascent to Mount Pentelikon, on the high road between Marathon and Athens, where, according to the Acropolis Album newspaper of 1896, the course “swerves around its peaks, gorges and the mountain sections inaccessible even to travellers on foot”.

Maybe Pheidippides should have collapsed and died right here before ever making it back home. That would have been the end of that. Because of all the impressions of running the so-called big city marathons – Dublin, London, New York, Honolulu – none have been more lasting than that original one, a properly mythical test of endurance that might never have even happened.

The story which inspired the race was mostly made up, and when they first retraced that original route for the Athens Olympics back in 1896, no one should have even finished. Even the word “marathon” should refer solely to that small town 25 miles north of Athens – and not, as anyone who has run that original route will attest, to the now host of imitation races worldwide, or indeed any event of great duration.

Instead the one sporting event based purely and originally on myth, the victory run by Pheidippides after the Athenians defeated the Persian army in 490BC, continues to thrive – the marathon of today essentially the same event as first staged over 2,500 years ago, albeit under slightly different circumstances.

Even after Baron de Coubertin had the vision of reviving the Olympics in 1896, it took French historian Michel Breál to present the idea of re-enacting this ancient run from Marathon to help publicise the games. The Greeks, moved by the presumed significance of such origins, agreed immediately – and the rest is distance running history.

History also found its way of settling on this distance – the Olympic marathon in London in 1908, measured from the start in Windsor Castle to the finish in front of the royal box inside the White City Stadium at exactly 26 miles and 385 yards – and somehow that’s only grown the appeal in all the years since.

Everything about Sean McGoldrick’s newly published history of the Dublin Marathon and its origins is suitably in tune with these mythical and unlikely beginnings. No more than de Coubertin back in 1896, the first running of the Dublin Marathon in 1980 was more to do with publicity than human or athletic endeavour, in this case the idea of Louis Hogan, then a senior producer with RTÉ Radio.

While on holiday in New York in 1978, Hogan stumbled upon a start-up marathon happening in Central Park, aimed at becoming a mass-participation event for the common man (and later woman) who would otherwise never consider running 26.2 miles.

Hogan parked the idea until a year later, when tasked with the promotion of RTÉ’s new pop music station Radio 2, set up in part to challenge the pirate stations grabbing a large part of the audience share.

“I remembered what I saw in the New York marathon and I thought maybe something similar could be organised in Dublin,” Hogan recalls. “But I hadn’t a clue about athletics.”

Luckily for Hogan he knew someone who did, two-time Olympian and former Villanova standout Noel Carroll, already familiar to RTÉ radio listeners as public relations officer for Dublin Corporation. With a little over a year to plan, and still plenty to make up, they would give Dublin its first mythical test of endurance on the October Bank Holiday Monday in 1980.

That date was suggested by Hogan, only declared a public holiday in 1977 thanks to then minister for labour Bertie Ahern. “Basically it was a dead day, so I said let’s make it Marathon Monday. There were no dissenters.”

Also coming on board was the Business Houses Athletics Association (BHAA), originally set up in part to fill the gap in road-racing not necessarily championed by the then governing body of athletics Bord Lúthchleas na hÉireann (BLE).

With BHAA chairman Alex Sweeney and Frank Slevin taking on race director roles the countdown began in earnest – the official launch mostly overshadowed by the news that same day that Johnny Giles was unexpectedly quitting as Republic of Ireland soccer manager.

Carroll’s Monday evening slots on Jim O’Neill’s Drivetime show certainly perked interest, only without even a computer to boot everything else was done by hand: the race programme, race numbers, race results.

Measuring the course, starting and finishing outside the Department of Foreign Affairs on St Stephen’s Green, was similarly basic, done off a car speedometer and still considered a “wee bit short”.

With BLE refusing to sanction the event, volunteers had to be found from other sources, with local resident associations along the route agreeing to provide nine water and sponge stations. Dublin Fire Brigade opened on-street hydrants as the water source.

Even though the only income was the £1.50 entry free from race participants, they also managed to secure a dozen cars from Hertz Rent-a-Car, and a Seiko race clock courtesy of Timemark, a Dublin watch distribution company.

Portaloos were also sourced from the US for the first time, set up on the then vacant site of the Conrad Hotel, though hardly used as most people didn’t know what they were.

Despite the many shortcomings, or perhaps because of them, they still secured 1,950 race entries by the September deadline, 44 late entries added for the official programme, which they sold for 30p.

They weren’t in the clear yet: torrential rain the day before saw the Tolka river overflow in Finglas, at the nine-mile mark, which necessitated a quick re-routing that Monday or else it might never have happened. The runners would do an unscheduled lap around St Stephen’s Green at the start to make up the difference.

The noon start also courted danger: would everyone make it home before darkness fell? Would those that did ever come back again? Would a small wooden plaque be enough of a reward?

For the 1,421 finishers that first day, or the 290,153 finishers in all 39 editions so far, it’s the mythical distance that keeps on giving. To think it might never have happened.

The Dublin Marathon: Celebrating 40 Years, by Sean McGoldrick, is published by O’Brien Press (€24.99).