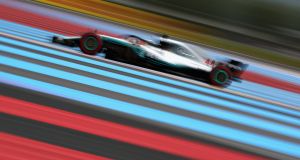 Lewis Hamilton on track during qualifying for the Formula One Grand Prix of France at Circuit Paul Ricard in Le Castellet. Photograph: Dan Istitene/Getty Images

Lewis Hamilton put his Mercedes on pole position for the French Grand Prix as the crisis at his former team McLaren took another miserable twist.

Hamilton stormed to the 75th pole of his career on Formula One’s first visit to France in a decade with a dominant display at the Paul Ricard Circuit.

The British driver saw off his team-mate Valtteri Bottas by more than one tenth of a second, while Sebastian Vettel, whom he trails by a single championship point, finished third and Red Bull’s Max Verstappen fourth.

But Fernando Alonso and Stoffel Vandoorne qualified 16th and 18th of the 20 runners on another humiliating day for the failing McLaren team.

Hamilton is armed with a new Mercedes engine this weekend, and the defending champion made no mistake as he edged out Bottas with his final flying lap.

The 33-year-old Englishman was a third of a second clear of Vettel, who had no answer for the Mercedes cars.

“Qualifying is always tough, but it feels great to be back in France,” said Hamilton. “It is such a brilliant place.

“I am really excited to come to the first grand prix at Paul Ricard for a long time and to be on the front row is a great showing for the team.”

Vettel added: “It is difficult to get the right balance. I pushed too hard in the last attempt, and you end up losing time rather than gaining.

“I knew with an amazing lap I stood a chance but it didn’t arrive.”

McLaren’s already troubled season descended into chaos here when a member of staff described the atmosphere at their Woking headquarters as “toxic”, branded the team’s hierarchy as “clueless”,and revealed staff are rewarded with small chocolate bars for their gruelling work.

On Friday, the team’s racing director Eric Boullier insisted he will not resign, but the decision could soon be taken out of his hands following another utterly abject display.

Both Alonso and Vandoorne were dumped out of qualifying at the first hurdle, and ended up a full three seconds slower than Hamilton.

It marked McLaren’s worst qualifying display of the season, and far from improving, they are falling back down the grid.

Indeed only Williams, another of Britain’s former giants, ensured the McLaren cars will not occupy the final row for Sunday’s race with Sergey Sirotkin and Lance Stroll 19th and 20th.

Alonso, 36, is out of contract at the end of the season, and it seems difficult to see why he would want to continue under the team’s current malaise.

Rookie Charles Leclerc, 20, continues to impress in his debut season. The Monaco-born driver hauled his Sauber into Q3 and he will start eighth.

Leclerc is on the books at Ferrari and, on the evidence of his displays this year, is now surely a contender to bump out Kimi Raikkonen at the Scuderia next term.

Elsewhere, the error-prone Romain Grosjean crashed out during the final phase of qualifying after he lost control of his Haas at Turn 4, slid across the track and into the barriers.