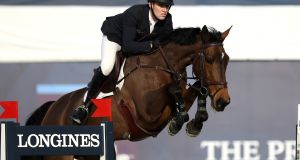 Irish riders recorded some excellent results in both show jumping and eventing over the weekend with Paul Kennedy bringing up a double at the four-star Bolesworth international show in England on Sunday when winning the 1.60m Grand Prix.

Again riding the home-bred Cartown Danger Mouse, on which he landed 1.50m jump-off class on Friday, Co Limerick-born Kennedy was one of 11 riders who progressed to the second round of Sunday’s Grand Prix and one of just five to record a double clear. He stopped the clock on 38.56 seconds ahead of Cork native Billy Twomey with Kimba Flamenco (38.65) while Britain’s John Whitaker finished third on Cassinis Chaplin (40.07).

Cartown Danger Mouse, a 12-year-old Irish Sport Horse mare by Harlequin du Carel, is owned by the rider’s mother Jane and was bred by his father Paul.

At Cascais in Portugal, Co Offaly native Darragh Kenny joined forces with Belgium’s Gregory Wathelet to secure victory on Saturday for the Paris Panthers in the eighth leg of the Global Champions Tour.

There were no wins for Irish riders in the weekend’s FEI classes at Spruce Meadows in Canada but Derry’s Daniel Coyle filled the runner-up spot twice on Saturday while his brother Jordan finished fourth in Sunday 1.60m Grand Prix with Elan Farm’s Eristov, one place in front of Brian Cournane on Dino.

In eventing, Irish riders Sam Watson on Horseware Ardagh Highlight and Cathal Daniels with Rioghan Rua finished sixth and seventh at this weekend’s DHL CCI4* in Luhmühlen, Germany, one of just six competitions held worldwide each year at the highest level.

Saturday’s cross-country action had a major influence on the result most notably when the leader on 27.40 penalties, the USA’s Boyd Martin, had to withdraw Shamwari 4 before the following morning’s second horse inspection having reported the 16-year-old gelding to have sprained a hind tendon across the country.

Following the cross-country phase, where just five combinations got home clear within the time allowed, Carlow’s Watson was lying seventh with Belinda Keir’s Irish Sport Horse gelding Horseware Ardagh Highlight. This was a place ahead of Co Kildare-based Daniels on Rioghan Rua as, although both remained on their identical dressage scores of 33.60, Watson had finished closer to the optimum time across the country.

Co Galway-born Daniels had initially been awarded 50 cross-country penalties as it was deemed that he and Frank and Margaret Kinsella’s home-bred ISH mare had not jumped inside a flag but these were removed on appeal. Both Irish riders moved up a place following the leader’s withdrawal. The pair had two fences down apiece in Sunday’s concluding show jumping phase but these additional penalties didn’t affect their placings.

Although there very few show jumping clears, the only rider from the all-female top five to have a problem was Britain’s Willa Newton who, with one fence down for the addition of four penalties, dropped from third to fifth with the ISH gelding Chance Remark (33.9).

The competition was won by this year’s Badminton CCI4* winner, New Zealand’s Jonelle Price here riding Faerie Dianimo (28.3), ahead of a trio of British riders – Laura Collett with Mr Bass (29.9), Ros Canter with Zenshera (29.9) and Kitty King on Ceylor LAN (32.2).

From nine combinations who travelled from Ireland for this four-star competition, three others completed – Co Cork’s Patricia Ryan on Dunrath Eclipse (12th on 53 penalties), Watson with his second ride Imperial Sky (24th on 86) and Ryan’s husband Michael on Dunlough Striker (26th on 118.10). Only 29 of the 50 starters completed all three phases.

“We are thrilled with the result,” commented Irish eventing team manager, Sally Corscadden. “It was a very tough competition and you don’t get a higher standard than CCI4*. We were aiming to get our riders fast cross-country and to have two of them inside the time yesterday was fantastic. Our riders are really upping their game, to finish sixth and seventh is fantastic. Trish Ryan also had a brilliant performance to finish 12th and it shows we are adding more depth to our squad.

“We feel we are becoming much more competitive and this gives us great confidence heading to the World Equestrian Games this year and for next year’s European championships here in Germany.”

Disappointingly, Sarah Ennis retired Horseware Stellor Rebound on the cross-country course where James O’Haire was eliminated with China Doll. Ciaran Glynn never got to start the second phase as his mount Killossery Jupiter Rising was found to be unwell on Saturday morning while Aidan’s Keogh’s Master Tredstep was not accepted by the ground jury at the first horse inspection last Wednesday.

In the CIC3* class at the German venue, Co Wexford’s Michelle Kenny riding Carlchen finished on a penalty score of 31.50 to place fifth behind Germany’s Julia Krajewski on Samouri du Thot (19.90).