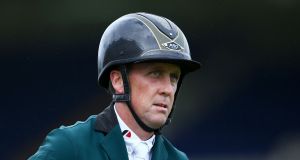 Ireland’s Shane Breen, who lives at the Sussex showgrounds, won Friday’s qualifier for Sunday’s famed Hickstead Derby when recording the fastest of three doubles clears in the 1.60m jump-off competition.

Five of the 42-strong field were clear in round one but Britain’s Will Funnell, a three-time winner of the Derby itself and one of the favourites for this year’s renewal, decided to withdraw Billy Buckingham before the jump-up.

There, his compatriot Holly Smith set the pace when clear in 59.59 with Hearts Destiny. Fellow British rider Harriet Nuttall also went clear with the Irish Sport Horse gelding A Touch Imperious, a 14-year-old gelding by Touchdown, but in the slower time of 63.54.

The first of the Irish riders in the jump-off, Co Sligo’s Richard Howley, picked up 16 faults with Notis Me but Breen had no such problems coming home clear in 57.76 with Team Z7’s 12-year-old Canturo gelding Can Ya Makan. Riding Ulrik Trolle’s Braveheart, Co Antrim’s Harold Megahey topped a quartet of Irish riders who finished sixth to ninth.

The last Irish winner of the Hickstead Derby, which is due to start at 2.45pm on Sunday, was Breen’s brother Trevor who recorded back-to-back victories on Adventure De Kannan in 2014 and Loughnatousa WB in 2015.

Saturday’s feature class at the five-star show is the British Speed Derby for which eight Irish combinations riders have qualified. Co Waterford’s Paddy O’Donnell has qualified two horses for this 1.45m class and will be second last to jumping with Hey There Delilah on which he won the opening international class of the show on Thursday.