Paul Wallace back making a splash in sailing 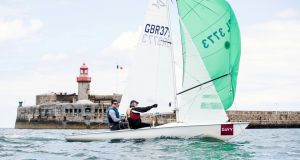 When this weekend’s Davy National Yacht Club regatta gets underway on Dublin Bay, the inevitable clash with the third test for Ireland against the Wallabies down under will grind with many of the crews.

None more so than Paul Wallace, the former tighthead prop who has come full circle in his sporting life, returning to sailing after a professional rugby career.

The former Monkstown Bay sailor will be competing on J109 Jalapeno on Saturday but like many of the crews, Saturday presents a conflict of sorts.

“I’m told the match will be shown when we get back ashore so hopefully people will stay schtum about the score,” Wallace told The Irish Times. “It was a hard decision but I had made the commitment and you can’t go back.”

Sailing was his first sport until the age of 17 when rugby started to take hold and as development training and tours became more and more demanding, his role as an instructor on Cork Harbour gradually lessened.

Wallace credits his training for dinghies like the Laser as useful for his rugby career, especially for leg and upper body strength.

However, persuading other former rugby players to try sailing is more challenging despite being ideally matched for roles on big boats such as mast or winch-grinding.

But in the past three or four seasons, he has returned to Sailing after initially racing a Dragon with Mick Cotter before moving into the J109 scene.

The time away from his first sport is also insightful with some parallels to rugby. Sailing has yet to shake-off the elitist tag that Wallace reckons is more perception than reality and not his experience growing-up sailing at dinghy clubs around the country.

Perhaps the bigger clubs in the city contribute to that perception but he also highlights how many people have €5,000 to €10,000 road bikes while getting a decent (second-hand) dinghy can cost as little as €1,000.

Wallace believes encouraging more people to get out on the water is key and getting involved with schools is huge, especially when you look at what happens in Schull (where sailing is on the PE curriculum).

Getting more media involvement, even just using short clips from major events featuring our most prominent sailors in action would help showcase how exciting the sport can be. That said, he concedes that events such as America’s Cup where the most technological TV developments are will still be alien to most people.

As far as increasing the reach of the sport to newcomers, events such as annual regattas - this weekend, the NYC expects 180 boats - bring together the best the domestic sport can offer newcomers and regulars alike.

As the event takes place in the alternate year to the Volvo Dun Laoghaire Regatta when all the Dun Laoghaire clubs mount a combined effort attracting over 400 entries, the National YC is still planning to grow their own regatta further.

There is clear growth of interest worldwide in classic boats and Dun Laoghaire has such a heritage in racing,” commented NYC Vice Commodore Martin McCarthy. “We see huge turnouts every week with the Water Wag class, the world’s oldest one-design dinghy.”

The NYC also hopes to attract more UK visitors by marketing the event to classes such as the J109 and Sigma fleets. The club is also expecting a big international fleet for the Flying 15 World Championships in September 2019.