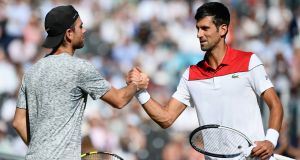 Novak Djokovic still has a burning desire to play tennis after racking up his 800th career win.

The Serb beat Adrian Mannarino 7-5 6-1 to reach the semi-finals of the Fever-Tree Championships at Queen’s, becoming just the 10th player in the open era to reach the landmark.

Roger Federer and Rafael Nadal are the other two of those players that are still active and despite two years of struggle, both with fitness and results, Djokovic has no plans to go anywhere anytime soon.

“When you work all your life for something and then you get rewards for it, of course it’s obviously very positive and I’m thrilled.

“It’s still the sport that I love with all my heart. I put in that heart every single day, and I’m just very glad to be able to play semi-finals here after Rome and Roland Garros tournaments that went pretty well for me.

“But before that, it was a struggle with surgery and elbow and up-and-downs and trying to figure things out and get that consistency in the game.

“So I’m really glad that I was able to play the way that I did in the first three matches in this tournament, and hopefully I can keep it going.

“So hopefully I can have many more years, because I truly enjoy playing this sport.

“I’m just grateful because I’m able to do something that I really truly love and enjoy and be successful in.”

On this evidence against Mannarino, which followed an impressive win against Grigor Dimitrov on Thursday, Djokovic looks to be heading in the right direction and will be a contender at Wimbledon in a fortnight.

He has played down that suggestion but accepts he is building some momentum.

“Sincerely when I came back after surgery, I thought that it wasn’t going to take me too long to build that momentum, but obviously it was proven to be otherwise,” he added.

“It took me quite a few months to actually feel comfortable playing again on this level, back-to-back matches and playing consistently well.

“I’m just very excited to be able to win in straight sets against very good players.”