Ali Meeke strikes at the death to see Ireland past Germany 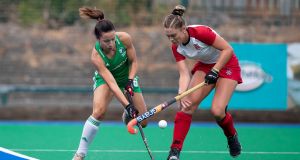 Anna O’Flanagan, pictured in action against Canada, was on target in Ireland’s win over Germany. Photograph: Morgan Treacy/Inpho

It came a month to the day before they line out in their first World Cup game and was a far cry from their recent performances against lower-ranked Canada whom they lost and drew with.

Anna O’Flanagan rebounded a Meeke shot to give Ireland an early lead, her 62nd international goal moving her just three off the all-time record held by Lynsey McVicker.

From there, Ireland held firm in defence with Lena Tice and Hannah Matthews to the fore, while Ayeisha McFerran was strong between the posts, keeping out a string of penalty corners.

They held the narrow lead all the way up to the 57th minute when Anna Schroder levelled matters. But Ireland summoned a great winning goal via Meeke. Shirley McCay’s clever pass found O’Flanagan in the circle, laying off for Meeke to calmly finish.

Ireland are next in action on Saturday when they meet the Canadians and they will face Germany on Sunday in a challenge match. These are the last games before Graham Shaw selects his final panel for the World Cup.