Ian O’Riordan: Given the cheating endemic in Russian athletics, questions will be asked 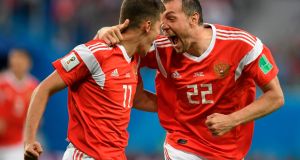 Too good to be true?

So ended some of the match reports following Russia’s 3-1 victory over Egypt on Tuesday night, perhaps disguising the question some of the stray dogs on the streets of Sochi are now asking. At least those not rounded up and quietly put down before the tournament commenced.

Because the question is not only can this Russian team give the hosts a World Cup of a lifetime, like Germany’s 2006 Sommermärchen – but in the era of zero tolerance and total transparency can it be entirely trusted? Especially given the backdrop of modern Russian sport, where if something appears too good to be true then it often is. And for that only Fifa have the answer.

According to all those neat little World Cup guides, Russia weren’t certain of making the knockout stages, even in a relatively soft group containing Egypt, Uruguay and Saudi Arabia. Just last month, the Sbornaya had fallen to 66th in the Fifa world rankings, winning just six of their past 19 matches, and none since October 2017. They’d also conceded nine goals in the past three games, leaving Russian manager Stanislav Cherchesov with a defence as fragile as the finest Fabergé egg.

All that changed in their opening game, Russia running rings around Saudi Arabia and winningn 5-0 – the best start by a host nation since Italy beat the USA 7-1 back in 1934.

When the stats came in it was even more impressive: at the end of the first round of group matches, Russia had three players in the top 10 for distance covered, their young midfielder Aleksandr Golovin leading the way with his 12.7km. The team also topped the stats list after the first round with a combined distance of 118km, or just under three marathons between them.

Against Egypt they dropped a little off the pace, covering 115km, yet it was no less eye-catching. These stats certainly aren’t abnormal, especially not for a host team cranked up on the national fervour.

Better still their aggregate score of 8-1 sends them clean through into the knockout stages – with a Group A game to spare – for the first time since the fall of the Soviet Union. In a World Cup where reputations have so far counted for nothing, mighty or meek, it’s been the one standout start.

None of this is evidence or even to insinuate that Russian footballers aren’t playing by the rules. Only if a Russian athlete was so dominant on the track or field it would straightway be considered too good to be true; except of course they can’t, the Russian athletics federation is still banned by the IAAF from all international competitions, including the European Championships in Berlin in August, as re-entry “conditions have not yet been met in full”.

That goes back to 2016, when Dick Pound, the former head of the World Anti-Doping Agency (Wada), first revealed that Russia had essentially “sabotaged” the 2012 London Olympics, such was their “widespread inaction” against athletes with suspiciously obvious doping profiles.

They’d cleaned up on the track and field and road – winning eight gold medals, and another five silver and five bronze. Too good to be true?

Almost all those Russian medals have now been stripped after sample retesting, including the 50km walk gold medal won by Sergey Kirdyapkin, which resulted in Rob Heffernan being upgraded to bronze.

“It’s worse than we thought,” added Pound, a man who usually fears for the worst when it comes to doping.

He’d chaired the Wada Independent Commission, along with Canadian lawyer Richard McLaren, which produced a 323-page report where, among other things, they identified “a deeply rooted culture of cheating” in Russian athletics, and, by likely extension, in other sports too.

Later, Russia’s entire 23-man squad from the 2014 World Cup in Brazil were implicated in the McLaren report, only for Russia’s then deputy prime minister Vitaly Mutko, also the head of the Russian Football Union, to describe those doping allegations as “nonsense”, telling the Russian news agency TASS that in football there “never has been or never will be any doping”.

At that point Pound added: “There has been an institutional denial of doping in football for years ... I’ve seen too many presentations by Fifa, straight out of fantasy land, about how they don’t have a problem”.

More recently, the International Olympic Committee (IOC) were forced to make a stand too, banning Russia from the Pyeonchang Winter Olympics earlier this year.

Too good to be true? All of those medals have also been stripped after retesting, and several Russian officials, including Mutko, banned by the IOC for life.

Four years ago, the 2014 World Cup in Brazil carried out over 1,000 tests on all 32 teams, 736 players in total, including 777 out-of-competition and another 232 during the tournament itself. Every single one came back negative. Yet in 2015 a study, commissioned by Uefa, found that in tests on some 900 top players, between 2008 and 2013, 7.7 per cent had elevated levels of testosterone, which can sometimes indicate the use of banned substances.

Fifa, meanwhile, has declined to disclose how many tests are being carried out of the Russian team, or indeed exactly where.

For now all we know is that the last player to fail a doping test at the World Cup remains Diego Maradona in USA 1994, his sample actually showing up five different variants of the stimulant ephedrine, although it’s said the only reason Maradona was caught is because Fifa wanted him caught. Too good to be true?