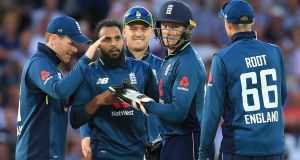 The pitch may have been flat and the opposition bereft but Eoin Morgan’s one-day wonders hit a new high at Trent Bridge on Wednesday, inflicting a world record 481 for six on Australia’s hapless bowlers en route to a crushing, series-sealing victory.

Jonny Bairstow and Alex Hales bludgeoned scores of 139 and 147 respectively as the home side roared past the 444 for three made against Pakistan here two years ago – the previous best by a men’s team in 50-over cricket – with Jason Roy striking 82 from opener and Morgan cracking a rapid 67 from number five.

When Adil Rashid claimed four wickets to roll out Australia for 239 in the forlorn reply, it meant England had completed the biggest victory by way of runs – 242 – and also the heaviest suffered by the tourists. Put simply, this was a mauling and one which has now secured an unassailable 3-0 lead with two matches to play.

If Trent Bridge, also the scene of their highest chase of 350 the summer before, is the field of dreams for these English thunder bats, then it is now the stuff of Australian nightmares. The very same ground where their Test side were bowled out for 60 in the Ashes three years ago has seemingly become a road to perdition.

And to think that Tim Paine, sporting a cut lip and wobbly tooth after being struck in the second one-day international (ODI) at Cardiff, actually won the toss. Overcast skies may have instructed the call but the two new balls went gun-barrel straight as England’s openers began hammering them like a pair of eager blacksmiths at the forge in a blistering stand of 159 from 19.3 overs.

The sparks flew from the off, such that mutterings of a possible record total – or even 500 – began during the 79-run opening powerplay. Bairstow had a couple of close shaves when saved on review after being given out lbw to Ashton Agar for 27, and then being dropped by the diving Marcus Stoinis on 30, but still glowed with form en route to a 39-ball half-century.

Roy, fresh from his 120 on Saturday, was similarly iridescent, following his partner to a 41-ball 50 of his own. By this stage he had cleared the rope three times, the pick of which saw Jhye Richardson heaved miles behind square and the ball lost.

Though Roy’s demise came from over-ambition, chasing a second run only to be undone by D’Arcy Short’s fine work in the deep, it merely brought Hales to the crease. The 29-year-old may not boast the recent back catalogue of the two who have usurped him as openers but this is his manor, where his 171 bullied Pakistan, and he had a point to prove.

After all, Hales knows the return of Ben Stokes will likely see him as the fall guy. But this innings will not make it a simple swap. Five dot balls to start may have given Australia thoughts of a route back in but they were a mirage, with the right-hander unleashing a flurry of five boundaries from the next seven balls sent down.

Bairstow was still motoring. The Yorkshireman is so wonderfully simple in this mood, crunching balls so freely that the margin for error is minute. His third six to bring up the 200 in the 24th over was a fine inside-out drive off Short (Australia’s eighth bowler used by that stage), while his fourth off the part-timer’s next over was swatted into Fox Road stand to make it an astonishing four one-day hundreds this year – this one from 69 balls.

While Bairstow eventually picked out deep midwicket to leave England 310 for two from 35 overs (they had moved from 250 to 300 in only 21 balls), and the promoted Jos Buttler similarly fell in the deep for 11, Hales was soon celebrating his hundred from only 62 balls and had a fresh ally with a mind for destruction.

Though Morgan broke into the England team as a 360-degree outlier, only to see the rest catch up, the captain still has the shots to stand out, such that he needed only 21 balls to reach his half-century, in the process becoming the country’s leading one-day run-scorer by passing Ian Bell’s career haul of 5,416.

It was in the 46th over that England went higher than ever before, overhauling their own record with 27 balls to spare as Hales butchered Richardson for his fifth and final six to an almighty roar from his home crowd. The 500 did not follow – Hales and Morgan fell in quick succession to the right-armer, before Joe Root slightly gummed up the works from number seven – but it is coming. And there is every chance Morgan’s men will be the ones to do it.

It is certainly difficult to envisage it coming from this Australia side, who face an almighty challenge in defending the World Cup next year, even with David Warner and Steve Smith back from their suspensions. They stood no chance in the reply here, of course, with Travis Head’s 51 from opener the top score as England chipped away merrily.