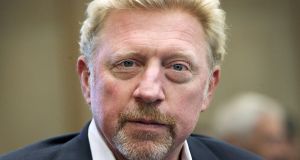 Three-time Wimbledon champion Boris Becker is claiming diplomatic immunity from ongoing bankruptcy proceedings in the UK on the basis that he is an ambassador for the Central African Republic, British media have reported. Photograph: Getty Images

Former world tennis number one Boris Becker has claimed diplomatic immunity from bankruptcy proceedings — citing his role as a sports attache to the Central African Republic.

Becker, who is a three-time Wimbledon champion, was appointed to the role in April and lawyers for the 50-year-old German lodged a claim asserting immunity in the English high court on Thursday.

His position as attache to the European Union on sporting, cultural and humanitarian affairs is covered by the 1961 Vienna Convention on Diplomatic Relations.

This means Becker cannot be subjected to any legal proceedings without the consent of British foreign secretary Boris Johnson and his counterpart in Bangui, lawyers Sylvester Amiel Lewin and Horne said.

Becker was declared bankrupt in June 2017 by Registrar Christine Derrett, who recalled watching him play on Centre Court.

The tennis champion is currently selling memorabilia of his career including Wimbledon trophies to help pay off his debts.

The bankruptcy application was made by private bankers Arbuthnot Latham & Co in connection with a judgment debt owed to them by Becker dating as far back as 2015.

Becker said: “The decision to commence bankruptcy proceedings against me was both unjustified and unjust.

“A bunch of anonymous and unaccountable bankers and bureaucrats pushed me into a completely unnecessary declaration of bankruptcy, which has inflicted a whole heap of damage on me, both commercially and professionally, and on those close to me.

“I have now asserted diplomatic immunity as I am in fact bound to do, in order to bring this farce to an end, so that I can start to rebuild my life.”

Mark Stephens, lawyer with Howard Kennedy and an expert in diplomatic immunity, said Becker’s creditors should raise the issue with the Central African Republic to ensure anyone with a legitimate case for the former tennis ace’s money could make it.

He said: “What you might say is where you are claiming diplomatic immunity because it directly flows from your job, it is right that immunity is both legal and morally sensible.

“In another case, it may be legal to have diplomatic immunity but it is not morally appropriate because you are using your immunity as someone with diplomatic status to avoid, say, a parking fine, or paying money to support your family.”

He said Becker “should not be allowed to avoid accountability just because he has a role with the Central African Republic”.

Mr Stephens added: “One of the problems we have is there is a kind of blanket assumption that just because they are a diplomat they should be freed of all moral obligation. That’s clearly wrong.

“The Vienna Convention which established diplomatic immunity was intended to protect the highest members of state — sovereigns, prime ministers, that sort of thing — not advisers to fishing organisations, say.

“What’s happened is the doors have been thrown open to diplomats and as a consequence we have got so many that will not hold the high status of diplomacy. We have to make them accountable.”