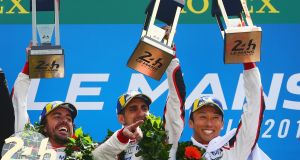 Fernando Alonso and his two Toyota teammates Kazuki Nakajima and Sébastien Buemi put in a superb drive to win the 86th edition of the Le Mans 24 Hours. The trio beat their sister car of Mike Conway, José María López and Kamui Kobayashi into second, with the Rebellion racing privateer squad of Gustavo Menezes, Mathias Beche and Thomas Laurent in third.

For Alonso the win, on his first attempt at the iconic endurance race, means he has secured two of the three victories required to equal Graham Hill, the only driver to have achieved motor racing’s triple crown. With wins here and Monaco now under Alonso’s belt, only the Indy 500 remains.

It was a strong team effort from all the drivers in the No 8 car, especially as they were pushed by the sister No 7 throughout. But the Spaniard put in an exceptional and pivotal stint through the night, serving as a salutary reminder of the skill behind the wheel he has been unable to display of late in an uncompetitive McLaren in F1.

His enthusiasm for the race has been clear all week at the Circuit de la Sarthe and when he finally climbed from the car with just over two hours to go it was entirely undiminished. “The only shame is that Le Mans is only once a year,” he said. “We should have this race every two or three weeks.”

For his teammates to win will be of even greater import. Neither Nakajima nor Buemi have won Le Mans before but both came heartbreakingly close in 2016. They shared the Toyota leading that year when, with the Nakajima at the wheel, it ground to a halt with one lap to go due to a fractured airline. Their elation and relief at gaining redemption this time was palpable. For Toyota – now only the second Japanese manufacturer to win Le Mans after Mazda’s victory in 1991 – this is the win they have targeted above all.

They were the class of the field and the winning No 7 completed 388 laps and finished two laps ahead of the No 8 with both cars 10 laps clear of the Rebellion. Toyota are the only manufacturer in the top LMP1 class this year and enjoyed a clear advantage over the privateers from the off. Their two cars quickly established a strong advantage in the opening six hours where they competed with on another, exchanging the lead repeatedly.

However, Alonso’s car was put on the back foot after a 60-second stop-go penalty for speeding in a slow-zone early into the 10th hour. It put the squad just over two minutes back when Alonso took to the wheel around 1.30am and put in a storming quadruple stint to haul them back into contention.

He was running lap times in the 3min 19-20sec region of the 8.46-mile circuit and hitting them with metronomic consistency. Repeatedly between two and four seconds a lap quicker than Conway and then López he had almost halved the gap when he offered to just keep going. “Tell me if you want another stint, eh? I’ve got into the rhythm of the night,” he said over the radio. It was a remarkable performance at night on the first time he has driven the circuit competitively.

Nakajima replaced him and he showed the pace was still there, finally passing Kobayashi for the lead through Mulsanne corner after 16 and half hours. It proved enough, Alonso and Buemi were able to consolidate and extend their advantage and fittingly the Japanese driver was given responsibility to see them over the line, this time achieved with a lack of drama.

There had been suggestions from some quarters that Toyota would mange the Alonso car to the win but there was no indication of this at La Sarthe. The pace of the No 7 proved to be decisive after a contest where both sets of drivers proved to be pushing to the limit.

Toyota have been plagued by bad luck at the race they have tried repeatedly to win. In 1994 their car suffered a gear problem with 90 minutes to go after leading for nine hours and in 1998 a gearbox failure cost the team while going for the win. The next year a tyre blowout ended a late charge to compete for victory. A sensor failure in 2014 melted a wiring loom and ending the leading car’s challenge and after 2016’s last-gasp failure, in 2017 they were the quickest cars in the field but suffered two DNFs and an MGU issue that dropped the third car from contention.

There were fears before the race that the Toyota team was doomed to continue this litany of misfortune but they executed this 24 almost to perfection. Meticulously calm and in control throughout, they would doubtless have rather it been against former rivals Audi and Porsche – but as the last manufacturer standing had only themselves to beat.

They did so with a performance that would have been hard to match by any competitors and with a win absolutely deserved.

LMP2 was won by the G-Drive Racing Oreca of Jean-Éric Vergne, Andrea Pizzitola and Roman Rusinov. The Porsche 911 RSR of Kévin Estre, Michael Christensen and Laurens Vanthoor took the flag in GTE-Pro. In GTE-Am victory went to the Dempsey Proton Porsche of Julien Andlauer, Christian Ried and Matt Campbell.