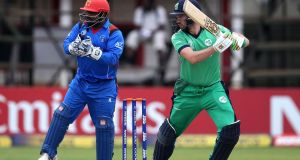 Andrew Balbirnie made 74 from 40 balls as Ireland beat Scotland by 46 runs in Deventer. Photograph: Inpho/ICC

Ireland got a huge boost ahead of their marquee Twenty20 fixtures against India at the end of the month by claiming a 46-run win over Scotland in the Tri-Nations series in Deventer on Saturday.

Having lost both games to the Netherlands during the week to extend their losing streak to six, Ireland turned their fortunes around on the back of a strong batting performance.

Andrew Balbirnie took advantage of a first start in the series ahead of the rested William Porterfield as the Pembroke right-hander top-scored with 74 off 40 balls as Ireland posted a total of 205 for five.

Skipper Gary Wilson continued his fine form, adding 58 from 38 balls to add to his undefeated 45 not out in the second game of the tournament against the Netherlands.

Fresh from their historic win over England in a One-Day International in Edinburgh, Scotland could not repeat the heroics despite an opening partnership of 65. Callum MacLeod, the batting hero against England, only made 12 as Scotland finished on 159 for five.

The two sides meet again at the same venue on Sunday, Ireland’s final game in the series. They will face India in two T20 internationals at Malahide on June 27th and 29th.