Irish rider will concentrate on his own form in this year’s race, one of the toughest 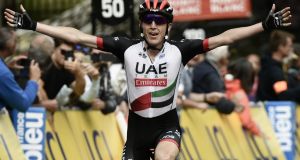 At just under 10km in length, reaching a maximum height of 525m, the Sally Gap is not exactly one of those hors catégorie climbs of the Alps, or indeed the Pyrenees, but decent training nonetheless. Dan Martin was thinking that during a quick spin up there on Thursday morning.

“Yeah, up past Johnnie Fox’s, then up the Sally Gap,” he says. “Windy but beautiful. What a day for it. Uphill into a headwind to start with, then about an hour and a half, at 20km per hour. I love riding round there, and it was nice to get up again. It’s been a while. I don’t get the chance very often any more.”

The foothills of the Dublin and Wicklow mountains was where Martin spent some summer weeks back in his youth, with his mother Maria’s family, sister of 1987 Tour de France winner Stephen Roche. Martin is now just under three weeks from starting his sixth Tour, and after finishing sixth last year, despite a heaving crash on Stage 9, is looking and talking as if primed for the ride of his life.

“Preparations have gone really well,” says Martin, on a visit to Dublin as a brand ambassador for Garmin. “Honestly, I’ve been feeling better than I have all year, for a few years. It hasn’t quite clicked in races, but I think you saw in the Dauphiné last week [Martin finished fourth overall, winning Stage 5], finally I managed to get the strength and the good feelings I had in training down on paper as a result. Because I have been feeling that good all year [but] something just wasn’t clicking, whether my head or nutrition or whatever.

“The frustration was coming, from some crashes and some sickness, but finally I just stepped back and said, ‘Okay, why do we do this? Why am I racing, spending so much time away from home? It’s because I enjoy it, and let’s just get back to that, without the consequences of the result. That was the perspective I’d always had, but it was more about pressing the reset button.”

The route of the 2018 Tour is one of the shortest of modern times, but among the toughest – and already not without controversy: British rider Chris Froome is seeking a fourth successive Tour win, despite the still pending case of his positive test for excess levels of salbutamol in last year’s Vuelta a España.

“I’m not technically allowed to comment on it,” says Martin, riding this year for UAE Team Emirates. “The team told me not to, but I don’t really care. We don’t know anything, do we? It sounds horrible sitting on the fence, but we don’t know the facts, and it’s hard to comment. It’s the situation we’re in.”

Nor, he says, is Froome being commented on much in the peloton: “Not really, because again nobody knows anything, not even his own team-mates know anything. It’s all kept very hushed, and when we find out the facts, then we can make a comment. But for the time being, either way, it’s a mystery as to what seems to have happened.”

Does he expect Froome to start? “I’ve no idea. Either way, I don’t think it affects my race that much at all. Whether he’s there or not, I’m just going to focus on what I’m doing, and then if he is there, he’s just one more person to beat.”

The Tour route, as tough as it is, appeals to Martin: starting on July 7th on Île de Noirmoutier, it takes in cobbles, then the Alps, and the closing week is played out in the Pyrenees, including an explosive stage of merely 65km.

“It suits me. I like the Pyrenees more. But it’s a real 50-50 Tour this year. The first nine days more or less flat, maybe 20 mountain points. Then the next six days maybe 260. You can lose the Tour on any day, and it’s about staying focused every day.

“The three days in the Alps are brutal, especially after nine days on the flat. It will be a complete war of attrition, the Alpe d’Huez stage: about six hours on the bike after two days in the mountains before. There is no off day. There is never an off day, only some relaxed days. But this year there are no relaxed days. It will be a rollercoaster, guys losing time one day, making it up the next. I think the course is good for me. The last time trial suits me the best ever. But psychologically, it will be the most testing Tour de France in a long, long time.”

Is a podium place a target? “That would be a big box ticked in my career, but I never set goals. My goal is to get to Paris without a crash, without hindrance. Look at the Roubaix stage, you could lose 10 minutes with a flat. And your race is over just because of a mechanical. I’ve an incredibly strong team to protect me for the first part, then the hard work starts.