The Scot, who last played 342 days ago in Wimbledon 2017, can look to positives despite defeat 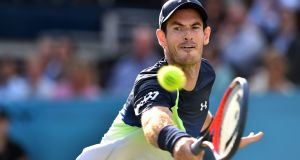 Britain’s Andy Murray returns to Australia’s Nick Kyrgios during their first round match at the ATP Queen’s in Lindon. Photograph: Getty Images

Not a soul in tennis – including the man himself – expected Andy Murray to do even half of what he did at Queen’s Club on Tuesday afternoon, and push Nick Kyrgios all the way over three thrilling sets, celebrating a rousing return to tennis after 342 days away.

It was an extraordinary performance in many ways. On Saturday, a fit and inspired Kyrgios, returning after nearly three months out injured, took the world number one, Roger Federer, to a third-set tie-break in the semi-finals at Stuttgart. This should have been a stroll in the sun for the Australian against an opponent who only five months ago was lying on an operating table in Melbourne hoping his long-time confident, Dr John O’Donnell, had successfully scraped clean the detritus gathered around the ball-joint of his left hip.

He had – but the anxiety lingered until precisely 4pm, when, in the first round of the Fever-Tree Championships, he returned to the day job. Playing in comforting sunshine on the Centre Court in front of nearly 10,000 enraptured fans – as well as probably millions watching on TV – the most stubborn Scot since Rob Roy ignored all internal and external pressure before Kyrgios hung on to win 2-6, 7-6 (4), 7-5 in two hours and 39 minutes.

Beforehand, Murray was adamant. “I have zero expectations.” Afterwards, happy to have defied all predictions of a wipeout, he gave his conqueror and friend a hearty hug at the net, relieved and no doubt happy to have come through his first public examination since Sam Querrey put him out of the quarter-finals at Wimbledon last summer.

Kyrgios said courtside, “We’re good mates. I was thinking it out there: just great to see him back, healthy. That’s the most important thing. I was expecting him to come out and see the ball well. He’s a legend of the sport. I wasn’t expecting anything less, to be honest.”

There were was much for Murray to be happy about. His court management and instincts were near faultless. The ball left his racket with a pleasing thump and his movement was more spritely than anyone had suspected. If there was a hint of the limp, it was one only a surgeon could detect.

He took a little longer to trust his body in measured rather than frantic runs for wide balls. But he grew in confidence against an instinctive shot-maker who is always keen to keep points short. The patron saint of lost causes let a couple go as he worked his way back into the groove, and was confounded early by a drop-shot, but it took him five minutes to thrash the first of 16 aces, and 35 minutes before he allowed himself a “Come on!” and a fist pump, to celebrate a break for 4-2.

Kyrgios’s spirit wilted. Murray’s rose when a double-fault gifted him the first set in 41 minutes and another fist pump was let fly.

The second frame was a different sort of trial, as the lactic acid gathered in their muscles, and Kyrgios finally found some rhythm. Having extricated himself from several tight spots, Murray levelled in the eighth game and shifted expectation across the net.

Kyrgios, nervously, held. The light shone on Murray once more. He double-faulted. He grunted. He aced – and he was four points away from one of his most improbable victories, of which there have been many in the past 13 years. But he misjudged an opening and they went to a tie-break, which favoured the giant-serving Kyrgios. He led 3-0. Murray fought to 4-all. Kyrgios, serving at 134mph, got to 5-4, then 6-4, before putting away the winner to force a third set.

Kyrgios, ahead in the serving cycle, began to boss the exchanges. Murray, his limbs tiring, was in a dog-fight. But a man with nothing has nothing to lose. Kyrgios, as impatient with himself as he is with his critics, over-cooked enough ground strokes to give Murray hope, and the Scot found his second wind for a fighting 3-all hold after two-and-a-quarter hours.

In the remaining exchanges, they traded blows of the highest intensity. Murray saved two match points in the 10th game, peppering Kyrgios’s forehand into submission. Kyrgios took his aces tally to 18 with a manic serving display, saved a break point and held for 6-5.

A forehand sailed long to give Kyrgios a third match point – and this time Murray brought the most compelling drama to a conclusion with a double-fault, a strangely anti-climactic denouement.

Earlier, Novak Djokovic, also guarding long-term injury, was outstanding in seeing off the Australian John Millman. Stan Wawrinka, coming back from two knee surgeries and in Murray’s half of the draw, was similarly ruthless on day one dismissing British No 2 Cameron Norrie. There are some dangerous wounded soldiers out there.

Elsewhere on Tuesday, Federer took just 71 minutes to crush Aljaz Bedene in the first round in Halle, his 17th grasscourt win in a row. There are going to be some fascinating scenarios at Wimbledon. On the evidence here, Murray will be part of that. – Guardian Service